What a beautiful day today!! It was HOT! I was in a t-shirt by 10 am. And... we reveled in it because the forecast for the rest of the month (literally) is rain, rain, and more rain. Unfortunately today was a long busy full day. I had to go get hay in Athens. I had to unload the hay before the rain hit. And then at 2 I was going to Peri's Moms' funeral. And then after that I was hanging out with Mike. So as much as I wanted to ride for hours and take Fleck and ride him... I had to cut it short. I got up early to go get hay but that took forever!! Way longer than I thought it would. So I got to Ashland later than I wanted. 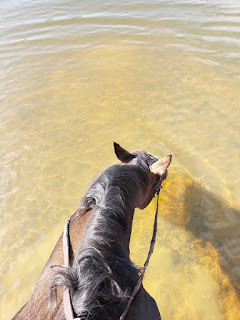 But I managed a fairly quick and rushed dressage ride. I wanted to run through the 2-2 test since we've never even run through it before, much less really played with it. And I desperately wanted to trail ride too, so... we warmed up fairly quickly. He was pretty good though. And then we ran through the test twice. It wasn't bad. Our canter/walk/canters still need a lot of work. But it's a fun test! I'm really glad I chose to ride it. The 3 loop serpentine with simple changes won't be great, but a lot of the double coefficients should be stuff that we can score well on. And Danny LOVES the medium down centerline! Coming back to the working and then halting is tough, but fun. :) And the second run through... WOW!! Danny had what felt like an amazing true medium trot!! Like... hubba hubba medium trot. So much fun!!!

Kelli was able to come ride too and managed to watch my last run through. She had some great advice. She did point out to not nit pick so much. When he messed up, just ignore it and carry on rather than make a point. Because when I made a point, I just made him more tense and braced and then it carried through. But if I just let it go, he stayed soft and supple and we didn't mess up the next movement. And.. she's right. Granted, in the show ring I wouldn't make a point, but... I did maybe over react. And I wasn't being terrible (Like I can be and hate about myself). But he's trying. Mostly. I mean, I should reward the try, or at least not punish the try. And besides.. it might be a great life philosophy for Dan anyways. He likes attention, whether it's good or bad attention. So.. maybe if i just ignore the mouthyness and pinned ears.. he'll just drop it. Especially if I reward the good behaviors. So... whether or not I can actually follow through with that... we'll see. Anyways, some other things Kelli pointed out were to take one stride before and after the mediums on the diagonal to make sure I'm straight. Because if he's crooked, there's no way we can have a nice medium. In the reinback, it's Halt and remain immobile for 3 seconds, then 3-4 STEPS (not strides) backwards. She also said that my canter mediums were good. One of them was even fantastic!! However, while there is a difference shown in my downwards from the medium to working, my walk to canter to working canter to medium canters were not clear. Basically because I'm so stressed about getting the correct lead in the upward transition, the canter is not put together and then I almost have to go straight to the medium. So instead I need to get the transition and immediately shorten and collect the canter and then go for the medium. That way they can see the transition in the beginning and in the end. And to achieve that.... she pointed out (just like Kelly, Beth, and Cindy..... sigh) that I was stopping him with my inside hand. So... if I thought about lifting that inside hand up and out, it helped me not restrict him. But I still need to keep my right hand steady and at my side. Apparently I've been dropping my left rein a good 6 inches below my right hand and throwing Dan off. Basically blocking his outside hind from stepping under and starting the canter. Which explains why he feels like he starts to pick up the other lead and then swaps. Because exactly what I keep saying is happening is happening. He KNOWS I want the left lead as we're tracking left but I'm blocking him/asking wrong so he isn't sure whether to give me the other lead and then does and swaps or can't give me the other lead until he does some fancy footwork and gets it despite me. Sigh. So yeah.. if I get him straight, get his head between his shoulders and then just open and lift my left hand and open and lift my left seat bone... viola! Lovely left lead canter. Then if I just close my right hand into a soft halt halt when the outside seat bone comes forward and sink my butt into the saddle but CLOSE MY LEG because it's hard... we get a lovely lovely engaged balanced fantastic canter. So fantastic that he can't quite hold it and tries to throw changes. ;) Hee hee. We were giggling at how funny he was with it. But yep... quite a lovely canter. It's just SOOOO much leg. And it's not a bad thing. He's just listening and isn't used to my butt being in the saddle so he's thinking I'm asking him to stop vs sit. And I probably am with my weak little leg. So... yeah. But it's a fun thing to play with and build on. :)

And we had a lovely short hack. Dan wanted to splash in the water and got me soaked! Man it was so hard to get off and go home.