Oh man.. no more jumping only once a month. That was awful!!! But we got it eventually. :) And much quicker this time. It didn't take us the entire lesson to get it. :)

But it started off terrible. Sigh. Beth set up two trot poles to a small cross rail. It was on the rail so it had a very slight bend/curve to it, but very slight. We started off and I couldn't get him in front of my leg. I couldn't stay with him, I was rowing with my hands... aghhhh... Finally we got it together. I had to push my hands forward. Think T-Rex arms. :) Ha!! It didn't work for me to think of pushing my hands forward, a that just made me tip forward with my shoulders. BUT... if I thought about lifting my hands up.... it was better. And I was trying to keep my leg in front of me too. So then Beth pointed out that I was counter bending him too much. I told her that it felt like he was throwing his right shoulder out so I was wanting to half halt on the right rein to shorten his right side. Beth said that he was not bulging out the right shoulder and that if anything, he was counter bent. She said to look at his ears. His left ear was lower, which meant that I needed to use my left rein to help straighten him. I'll be honest. I didn't believe her. It just felt so counter intuitive to what I was wanting to do but CLEARLY my efforts were NOT working. So I tried it. And.... lo and behold... she was right! It was almost like magic. He suddenly jumped correctly and smoothly and out of stride and I was able to stay with him. Magic!! So then we did it a few more times and went on to the roll top. And we choked at the roll top. UGH.... When I circled back, it was fine. So then we figured out that when he landed on the right lead, and I brought him down to a trot to fix it and then back to the canter, I let him get too behind my leg and the jump was poopy. But when Beth had me do it again and get my medium canter... it worked. :)

And then we added a fake corner (triple bar with a single pole on one side) and wide oxer and another vertical. And.. I started throwing myself at him and/or dropping him. So Beth tied knots in my reins. Yep... that way my hands had to stay forward AND I couldn't drop him. Well.. in theory. Once I did and just basically dropped the reins since I couldn't slip them. Doh! BUT... when I started counting AND had the knots in my reins.. it was like "Oh..... OOOOOHHHHH... I see!". I could actually see the distances and knew that I still had two left.. or one left.... not "I have no idea so go now!". And it got better and stayed better. And when I was counting, it distracted my brain enough that the thought tornado's couldn't take hold and fling me into craziness. I was like "One... that ear is down... two... so half halt on that rein.... one..... there's one more... two.... take of...oh hey.. that was nice"!.  Ha ha. So.. yep, Nothing exciting as far as height or loveliness. But it was quite nice because we finished well and became effective and it was a good ride. But I definitely need to not wait so long between jump lessons. We've got one more week until the dressage show and then it's back to eventing prepping!! We've got AEC's coming up!! Time to get in gear. :) 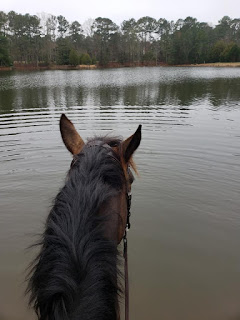 After our lesson I took Dan for a hack. We were tour guides for two other girls so Dan was excited to have company again. I left my jacket and vest at the arena though because I was hot while I was jumping. But just walking the trails I got soooo cold. My hands were frozen... and I even had gloves on! 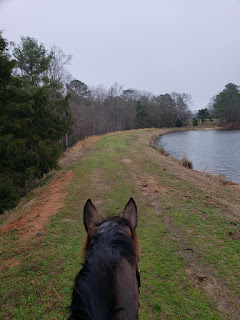