I love the weekends!! 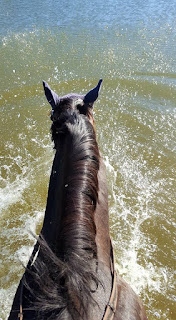 Danny and I were able to get in a ride on Saturday after a quick lake trip with Mike. Yet again, no wind. We did some dressage and then went for a hack. I tried Fleck's bit with Danny, but I don't think he particularly liked it. So I switched back. We had an okay ride but I was getting frustrated. I hate when I get frustrated. He was good and he was trying. We had some actual full 3 loop serpentine counter canters without breaking and without getting too off kilter. :) And we ran through our dressage test and I thought it was quite nice. :) Then we just went for a short leisurely hack. Although we did some trotting and some cantering. We cantered up the hill and there was a thick branch in the path. Not big enough to jump, but not a twig. He made me giggle cause he came up on it and almost spooked at it and then hopped over it like it was a bigger stick. hee hee. It was a nice day though. 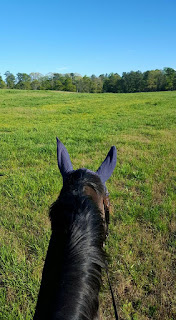 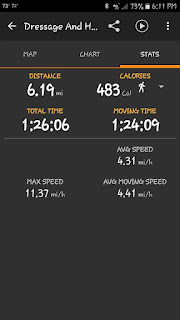 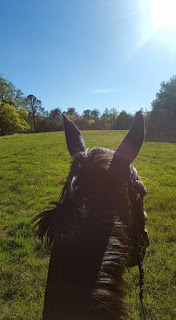 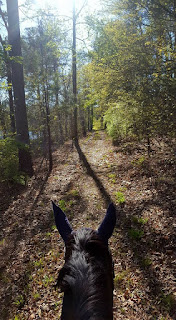 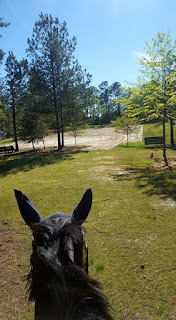 So then today we had a lesson with Kelly. I was a little sad that I didn't go XC schooling with Liz but I had a lot to get done and felt like I was getting stuck in dressage, so I was glad for the lesson. And it was so helpful!

We started with a warm up and Kelly said that she could tell I had been doing my homework. We did some trotting, down quarterline, leg yield to the rail and then shoulder in at the rail. Kelly said that it was great how forward he was and how quiet in the bridle and that our connection was good. But that he wasn't crossing very well. He was cheating. Yep... Cindy and I had figured that out too. He was doing the motions but not really pushing and going laterally. So then we went on a 15 meter circle and worked on getting him latitudinally supple, not just longitudinally... (Or maybe I have them flipped... I don't know!). Anyways, we started off by doing the 15 meter circle and I mentioned  that I felt like he was leaning in and maybe I needed more weight in my left stirrup...  Kelly said that my leg position was decent, and perhaps a bit of a chair seat. Sigh.... hmmm.... I can't win! Cindy thinks my leg is too far back, Kelly thinks it's too far forward.. I suppose it's possibly that I have overcompensated but... I don't know. Anyways... Kelly did mention that I should swap to a longer spur to make my aids more effective so that I didn't have to contort my leg so much. It was very relieving to hear that my leg wasn't going to do what I was wanting it to do.. not without thousands of dollars spent on yoga. ;) I sort of felt like with his body shape and my body shape, I was risking breaking my ankle to get the perfect position. I mean, I'll still aim for improvement, but it was a bit nice to have the longer spur. I could get the reaction I wanted without having to really push and move my leg. Like in my jump lesson. Anyways... we changed spurs and then went back to work. The goal is to get Danny soft and round and over his back and to keep his shoulders moving freely. We had a most lovely and soft and beautiful trot tracking to the left. Dan was over and through and my position and contact was decent. But then going to the right... it all falls apart. I panic and have a "thought tornado" and it gets all wonky. It feels to me like Danny is leaning to the inside, throwing his shoulders out to the left and just turning his nose into the right. And his hind end feels like it's haunches in. In other words, the exact opposite of what we should be doing..  So it definitely helped when I stopped holding so tightly with the outside rein, in an effort to keep his shoulders in. But I was then blocking his left side and not allowing him to open that shoulder and swing it forward and around. Plus I was blocking his ribs from going to the left because my outside rein was so stiff. So... if I allowed some more stretch, he got rounder. Sure, there were times he swung out but it was almost because I had too much inside leg. I need to keep the connection but make sure it was ELASTIC! So... it got much nicer at the end. Now to figure out how to keep it.  :)

So then I went for a little hack to cool him off. We did a tiny little bit of cantering, just because we didn't canter in our lesson. Granted, it was very much a hunter canter and not a dressage canter. So on our little trek we found a huge tree that had fallen down. We cantered along the path leading up to and past it and Dan eyed it. Nope!! Not yet little buddy.. not yet. So then as we continued on, we found another downed tree. This one was MUCH more appropriately sized and was next to the fence so the landing and take off were perfect. I couldn't resist. We cantered it. Even in the dressage saddle... :) It was a hoot. I had to do it again and this time I took a video. Wheee!!! One handed jumping trees in the dressage saddle. But you can't NOT take advantage of a fallen tree. :) Such a good kid. 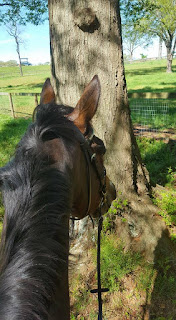 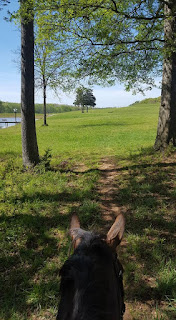 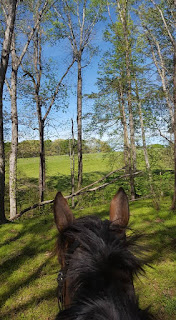 Nope... not that one little buddy!! 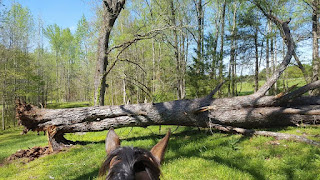 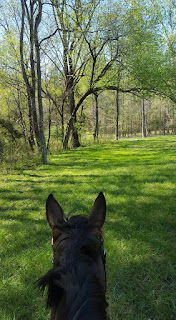 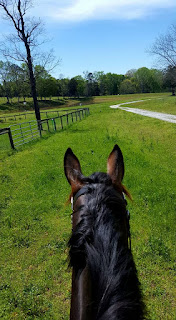