I had a great lesson with Beth again today. And I'm sooooo proud of Danomite! 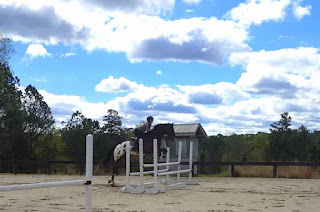 We've had terrible weather the past few days... a legitimate earthquake in south Georgia, tornado sightings and lots of storm and storm damage. We had no trees come down during the last two days worth of weather, but there was a TON of lightning and some pretty gusty winds and a ton of rain. So Danny and Fleck stayed in all day yesterday. I turned them out for about 2 hours and then they were back in again until this morning. I tossed them out for about an hour and then we went to our lesson. And the temps have dropped to about 55 degrees from 75 and it was WINDY this morning. 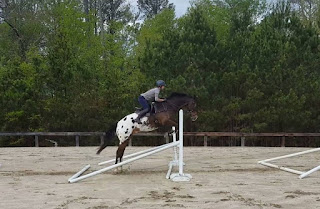 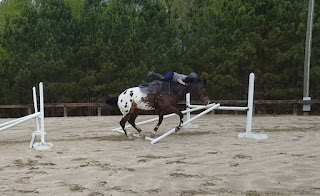 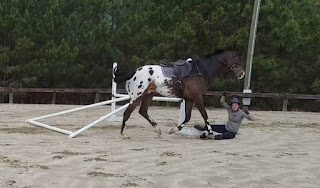 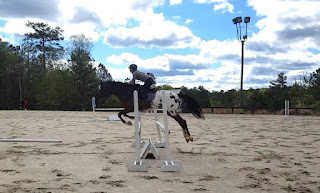 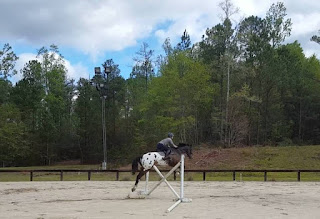 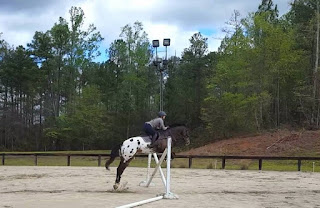 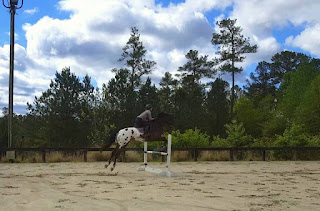 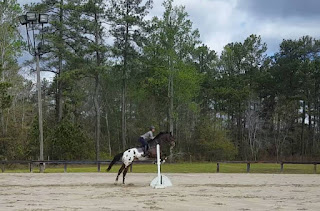 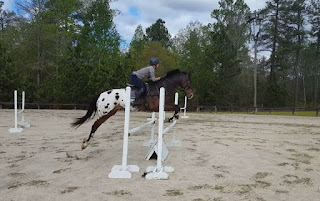 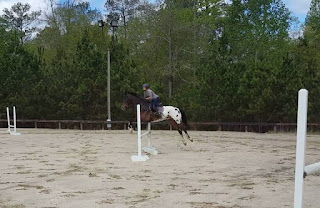 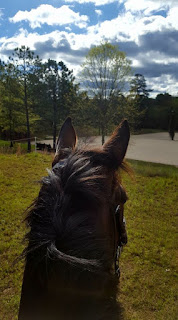 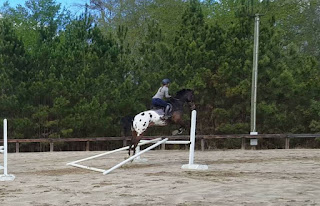 When we got there, Dan was fine at first but then the neighbors were hammering on the roof and that freaked him out. He started shaking and nervous pooping. And he got tall! I could barely get the bridle on him. So we headed out to the XC field to do some "suicide reps" to get him breathing and thinking. He was good. We walked (on tippy toes!) the whole way there and then we trotted way down the hill before we cantered. And we only cantered, not galloped. We went up and down the hill twice and then Beth arrived. He was actually pretty good in the arena but despite being "Up" he was still behind my leg so the spurs went on. We had a great lesson and figured some stuff out.

There is a significant right drift and my attempts to correct it with my hand are not working and screwing me up. He will respond to my right leg/spur, so that is important. And Beth mentioned that she wanted me to put more weight in my left stirrup and thought that my right lean may be contributing.Aha! I thought so... even on the flat. So to correct the right drift... lots of right leg and sink more weight into my left stirrup. And I don't usually need the hands after that.

We also figured out that Dan jumps pretty when he can get the slightly long spot. However, when he has to get deep, he tends to roll over his shoulder. So we'll do a lot more of the grid type lessons to work on showing him how to open up through his shoulders and scapulas. (And I"m going to try to adjust/electro/acupuncture)

Anyways... we had a lot of fun and did some good courses :)

I had to laugh because at the end, Beth's other students showed up to watch and Dan was scared of them! hee he... But he did good.
Course work

Then Beth wanted to work on his form so we did the rails on the fences in the grid to help sharpen him up and correct the drift. And I learned what happens when you don't correct the drift! Baby horse drifts and then decides he cannot jump the placing pole diagonally and runs out from under you. ;)

But then we fixed it... by making sure my shoulders stayed up, I was in the back seat, my hands were following and giving and NOT crossing the neck, and away we went.  It did get better. :)
Fixed it!