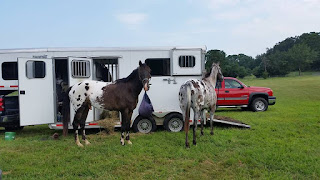 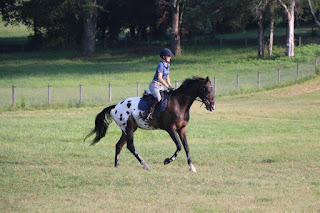 Danny's first stadium show. :)
It went about how I figured it would starting out. He has not been ridden since Tuesday because of work so I figured he'd be a little up. And he was. We warmed up in the pasture parking area rather than going up to join the crowd. It was a wise move. He was animated enough in the field by himself but settled down.
Warm up Antics
So I headed up to join the crowd. They had the little ring for our class and were letting us warm up in the big ring. Well.. Dan got all animated again and went to showing off his bounce. And his antics. There was this cute little black pony that sent a little sand flying onto the liverpool tarp as we were nearby. And the noise sent Dan to scooting. And then he was scared of the pony. And then we did lots of dancing and prancing. But I finally was able to get him going forward instead of just up. And then he reared up and twisted, almost landing on the fence. Goob. After that though he settled down just fine and we were able to get some work done and even jump some jumps. He jumped the first haybale jump like a very huge scary jump and almost crowhopped over it. I almost came off. Doh. But then he was fine. He even jumped the liverpool without even worrying at all. :) Good baby. 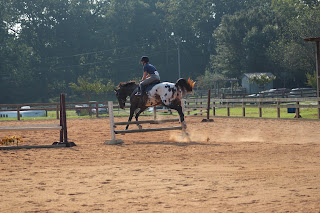 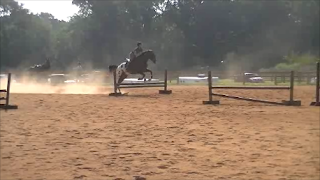 We did our first round and he was hilarious! He hit the rail on the first one because he was so busy looking at all the railbirds. Then we settled down for a little bit and were able to get over the next few. Then the second to last line, he was zigging and zagging and looking at the judges stand and so we had a stop. But he jumped it at our second attempt and finished the round happily. I was frustrated with myself because I kept catching him in the face. He's just hard to go with because he's not consistent yet. But I can't keep catching him in the face regardless.
First Round 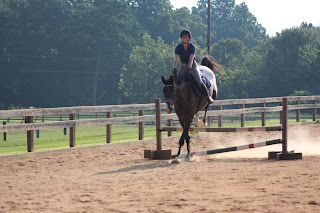 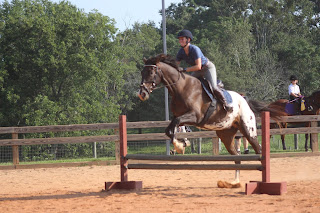 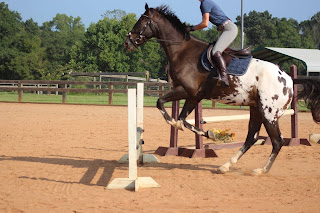 Our second round was MUCH better. We both learned. :) He was still looking around the arena but focused better and we didn't have any rails or stops. We still trotted in but were able to canter out the lines. And I was much better about staying with him and not catching him in the face. Yay!
Round Two 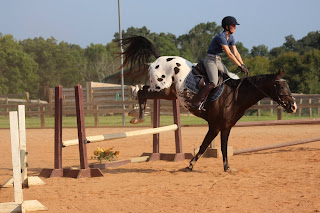 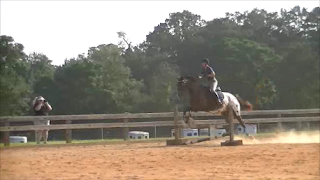 After Beth said that I needed to have a bit more connection with him. He needed a bit more help. She also said that I was tipping forward and perching. So she suggested that I lengthen my reins and ride from my hips. This way I could keep my elbows at my side, keep a connection a little firmer, but widen my hands to help funnel him. Then I was less likely to tip forward over the fences too and I would follow his mouth to release. So we practiced some in the arena. He was actually pretty good once we figured it out and we even did a skinny and then the skinny to the liverpool on a short bent line and then the liverpool to the skinny on the same line. :)

Yay!! We ended up 5th and 5th. Out of 5 each time. But that's okay. I wasn't going for speed or ribbons. I was just going for training. :) And I think we accomplished that. :) Good baby horse!