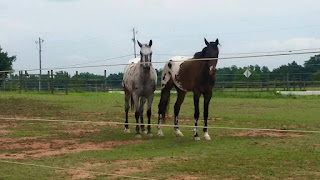 Doesn't Dan look HUGE compared to Fleck? Ha ha.. It's the angle. Although he is getting big!

We had our dressage leson today and Dan was great. I rode him first again because I was a bit late and wanted a bit more time to warm Fleck up. It works well for Dan. Again he was a superstar with no antics. (Those came after! Stay tuned). We got a nice right lead canter most of the time and worked on keeping my elbows to myself. Dan actually had a connection for a fair amount of the ride today. He's growing up! I worked on keeping my body in the middle of his body, rather than letting his body shoot out to the side. It was good stuff. We also did some geometry work for me. Cindy wanted me to do a 20 meter circle with an even amount of strides in each quadrant. Oops. Our first quadrant kept getting more. I couldn't figure out how to fix it. Cindy had to tell me that he wasn't starting his turn and was drifting down the rail instead. So I rode the "diamond" again and it helped. We got 7.5, 7, 7, and 6.5. :) Close enough.

Afterwards, I turned him and Fleck out in the paddock while I adjusted the lesson ponies. Its' just too hot to make them stand in the trailer. Apparently it's too hot in the pasture too. When I came back, I saw Dan had emptied and drug the muck bucket water trough out into the middle of the pasture and was flinging it and jumping around it. Sigh... So embarassing! I'm not sure if it was him or it was already like that but both of the rope handles were chewed to shreds too. Doh! I rinsed it and put it back and filled it up and grabbed the boys and ran. He's soooo..... busy!  :) 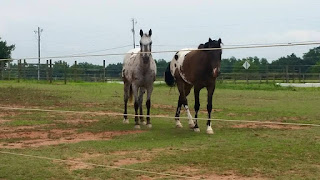