Dan was such a good boy today! We only rode for 30 minutes but he was super. We just did some dressage and worked on the basics. But he had quite a nice connection and even got both canter leads on the first try. Of course then I messed him up afterwards, but we eventually got it. He was twisting his head a little bit in the canter but I figured out that if I just ride him in the center (which at the moment means sitting slightly to the outside of him), he stops twisting his head. Yay! We had some lovely canter work and then some more lovely trot work. Even Kelli gave out an "oooh, ahhhhh" for some of it. :) 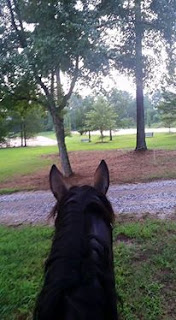