Oh Daniel... Naughty naughty Daniel.....
Though... it was my fault really. I didn't set him up for success.

So.. I decided to work with him again, and I guess it's been a week.. with work and the horse show. So he was coming up to the barn when I brought Fleck home. I caught him and Fleck decided to go out to the front field. Danny didn't care... he let me put the surcingle on him without even haltering him first. Then he got the bit and bridle on and the lines all lined up. Then we started to trek off and the temper tantrum started. Dan wanted to join his buddies and I wanted him to go another way. So we had a ten minute discussion concerning which direction to go and finally I won. But it was still a bit of a fight and he was all "up". So I decided to be smart and drive him to the round pen and then let him work off some steam there. So we did. He lunged great and even cantered but quickly responded to my commands. He seemed to have gotten his bucks out, so to speak, so back to long lining we went. The plan was to go down to the old arena and cross the creek and then go join the big guys in the field. Dan kept wanting to go to the right and go the other way to the field so we had more discussions. I finally got him to the arena and the darn deer were out and scary! Dan turned and bolted but I managed to keep a hold of him. We finally got turned around and headed back out that way and the darn deer bolted again. This time Dan turned, dug his heels in during his spin, and off he went. I didn't stand a chance so I let go. He went high tailing it to the front field. I trudged out there and luckily everything was still intact. His surcingle had slipped a bit, but was otherwise fine. So.. back to work we went. He did pretty well in the front field so then I made him go back to the barn. Fleck followed us but Dan did lead. However, when we got close to the barn he was definitely looking for the deer. Argh... so because I am as stubborn as him... I made him go back down to the ring. Unfortunately those bratty deer were STILL there, so I made him stop and then before he got scared, we turned and went into the dog pen pasture. He was good so we headed back to the barn and called it quits. 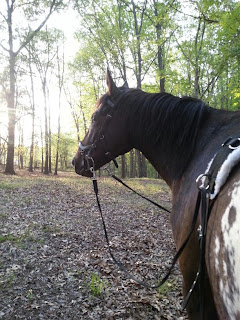 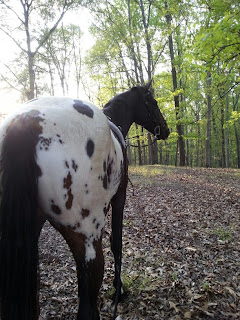 So yep... I learned my lesson. Always set the baby up for success. Especially the 15.3 (or more.. I swear he spurted up again) baby! He's a good kid.. and a smart kid.. but he's still a baby!! So I'll go back out better prepared and better prepped tomorrow. But we still were able to end on a good note.