So.... Today was a scary day. I've been letting the horses out on the grass for a few hours each day. I turned them out front today while I ran errands. (One of my "errands" was supposed to be getting Dan's leg x-rayed, but we couldn't fit it in.) But I managed to get a lot done and the horses were out for about 4.5 hours. I called them in and fed them. Was planning on teaching Dan about fly masks. :) We were going to start with the black earless one as opposed to the scary alien Easter Bunny one. ;) But no worries... we'll build up to that!

Anyways.... Danny ate and drank and I turned him out. And then he laid down... flat on his side. Hmm.... that's not quite right. He got right back up and then looked at his side. Awwww crud..... So I turned Roany out and he went and drank... then pawed the water trough (which is not normal behavior for him... he's not a "swimmer"). So crud..... I called Christina and she suggested banamine. I headed up to the trailer to get it and his halter and then we decided to just hitch up and bring him to the clinic. It may have been minor but after what happened with Dewey and knowing how paranoid I am... I figured I would feel better having her check him.
So I hitched up and got his halter and headed back down. And he was down again. Drats.... I got him up and walked him to the trailer. He stopped once or twice and seemed a little puny. He loaded about half-way up and stopped but then walked on. I think he was hurting and didn't feel like putting up a fight. :( So... we hauled to the clinic. I attempted to not be a super smooth driver, hoping I could jiggle him a little. Well... it must have worked... or my prayers did the trick! When I unloaded him there was one big pile of poop! Yay!! And as soon as he walked off, he pooped again! :) Double yay. And what made me the happiest was that when he got off he was bright eyed and bushy tailed and very curious. When I loaded him up, he was dull and had big pupils. So this was a much happier Danno. Christina heard a lot of gut sounds on both sides but his heart was a little elevated. Of course some of that could have been nerves. It was only his maybe fourth solo trailer ride and the last time he was at this place... it didn't go so well for him. Surgery isn't fun! So... we blamed that. And sure enough, within a few minutes, it had dropped even more. So, we gave him some buscopan just in case and some banamine.
Then we figured, well... what the heck, let's x-ray his leg while he's here! And good news on that end too! No fractures of the splint or any other bones and no problems! Yay!!! The splint bone had remodeled a bit but looked good. There was still some swelling but it was all soft tissue.

Thank God!! I was okay at first because he was calm and quiet, but... on the ride over I started panicked and praying. I really do love the guy already. So Double Phew...

And super thanks to Aunty Doc Christina who saved the day again..... Silly baby horses.... 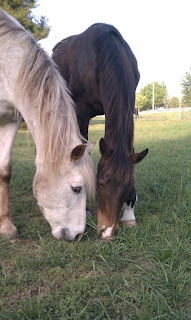