Big Brothers are not always cool!

So... my crappy week just got crappier. :( Went out to feed early this morning and was getting feed set up when I heard a commotion at the gate. Went and looked and Dannyis holding his left hind up in the air. (&(^(&^*%*))(((*&^%&^$ Sigh...... So I went and looked and luckily after the initial sting settled, he started to walk on it. I still panicked and called both my horsey vets.... They both thought it was hopefully just a little scrape/sting because it wasn't swelling and he was walking on it. Except... as soon as I hung up with them, I noticed that it was now oozing a small amount of blood and swollen. RIGHT ON TOP of the scar from his first surgery. Are you kidding me?!?! Argh... but I guess if he's going to hurt himself again, it might as well be the same leg. Argh.... Well, I had to get to work so I threw some surpass on it and gave him some bute and went to work. Luckily when I got home, he was almost 100% sound at the walk. Phew.... but still awfully swollen, just laterally. So... I did some yard work that desperately needed to be done and figured I'd address it afterwards.
Well...the day continued in the same vein. I've been so busy lately that I haven't been able to do much work with Dan, other than feed him and turn him in and out. He was freakin' out about his ears recently, but then after one big freak out session and 4 or 5 other ones... he was fine. And is fine tonight still. So... I have hope that he'll be fine if I can just manage to find some time (which may not be a problem shortly... but that's a whole other story). But so... he still doesn't do clippers and still doesn't do fly spray... and very apparently doesn't do water. I thought I could sweet talk him into just hosing that foot, but nope... We spent 15 minutes dancing in circles and kicking at the hose... which culminated in me slipping in the mud and landing on my ass, almost underneath him. Luckily, he's a good guy (despite being a almost 10 month old colt who hasn't had the benefit of lots of work) and didn't clobber me. So... I burst into tears and got up and turned the water off. Luckily Peri called at that point and said she was just down the street and could come help me. Yay!
So... between the two of us and a skin twitch hold we managed to convince him that sponging water on the leg to clean all the mud I had now gotten glopped on there was an acceptable plan. Then the furasone and DMSO and a wrap and he was done. And... oh was he done alright... His quarter was up... and up he went. Talk about a baby temper tantrum. So... we backed him up and made him stand another few minutes to learn some patience, and then we went back to his pals.
Sigh.... I'm really starting to remember why people don't buy babies.... the stress is just not cool. But... I wouldn't trade it for the world. I love my little squirt. I just need to find a way to make time to work with him. He really is a good baby.

So.... yeah... I hope that he looks better tomorrow, but no matter what... I know I'll x-ray him anyways to make sure. Fingers crossed and prayers said. 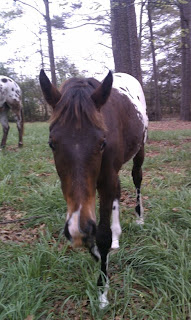