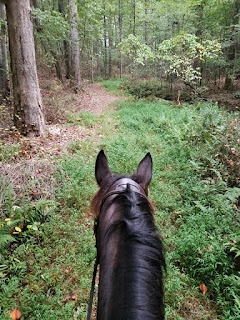 Somebody was feeling his oats today! And it wasn't me! I am plumb tuckered out from this week! It's been so hot and I'm just tired. But I got up and adjusted one horse this morning at Ashland before I rode. I tied Dan to the trailer with his hay and he was being pretty good. But then Josh pulled his rig up next to ours and Dan used that as an excuse to break free and go running. And of course, because it was a nice cool cloudy day... everyone was here! So he ran up to a group of trailers and tried to climb into one..  so the girl caught him. And then he was fine. ;) 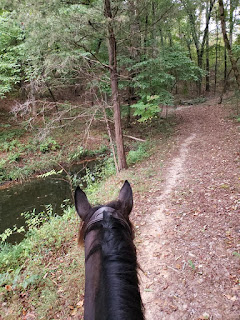 After I finished adjusting we went for a ride. We hacked around the small lake and then went into the arena and practiced some dressage. We worked on a bunch of things.  We had some really nice leg yields and he's really feeling straighter! Oh, and when I started my ride, I posted on the wrong diagonal tracking left and he felt better. He didn't feel quite as off when I was on the correct diagonal, but it's still there. (But... after the end of my ride when we were trotting out in the field, I could post on the correct diagonal and he felt the same as when I was on the wrong one.. ie sound!). We did some shoulder in and some haunches in and I feel like I'm starting to get true bend and not just neck in. We had some decent mediums and then we did some canter work. And ugh.. I've lost the left lead canter depart again. I think that if I actually sit BACK (in my mind, I"m sure I'm just straight) it was better but it's hard to say. We got it, but it wasn't as nice as it has been. We did some work on suppling and flexing in and out while cantering and that still needs work. We got some great canter serpentines and then when we tried to do our simples, we sort of lost it. We kept adding trot steps because he would break before I was ready. I know, I know.. MORE LEG! But at the end of our ride we got two beautiful simple changes, one in each direction!!! I let him canter down centerline after that and he was a happy camper :) So.. we quit with that. I was tempted to play more with some canter pirouettes and work on the suppling left and right more but.. after that, we quit. 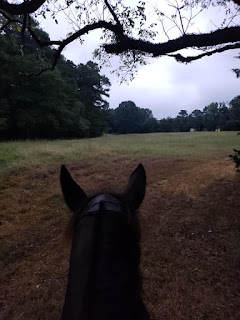 Then we went for a hack and just chilled. Dan was sad though because there were so many people out there and we couldn't find anyone to hack with and he felt cheated since he had to do dressage while everyone else was out playing. We did manage to walk in with a few horses that had finished up in the XC field so that helped. And then, most of them had left so I let him graze after I hosed him off and was wiping down my tack. And I saw him look over towards the ones that were left and I said "Dan, just stay here and graze" and took a step out of the trailer and.... Off he went!! Tail up and zoomed across to the trailer! That poor woman, he tried to climb in her trailer again. Then he went trotting up to sniff noses with Laura's two horses, so she caught him. Luckily all three boys behaved and there was no squealing or pawing and I caught him and took him back to the trailer. Sassy pants!!

Then tonight after I fed him dinner, he went for his hay but then followed me back towards the house a bit! Sorry buddy!! We snuggled a bit but then went back to his hay. :) 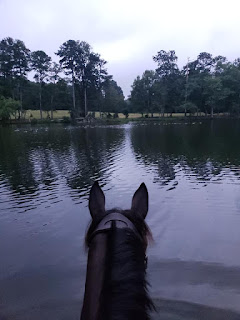 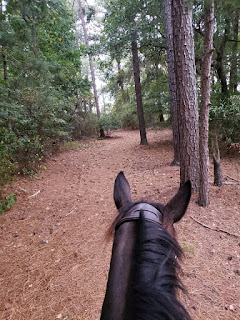 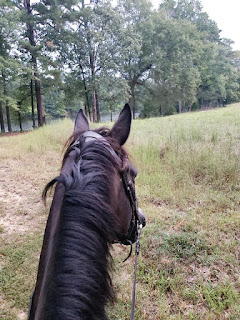