On Wednesday I finished early and it was supposed to rain Thursday, so I decided to go for a quick dressage school but met up with Missy so we just flatted in the jump arena and then went for a trail ride. 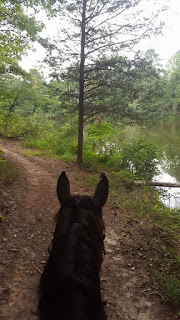 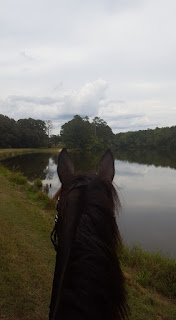 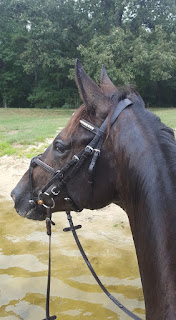 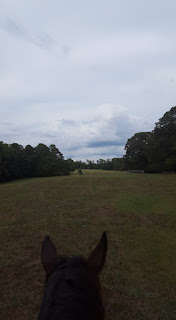 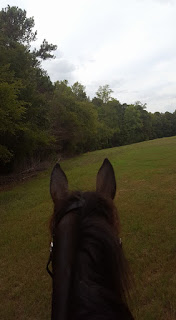 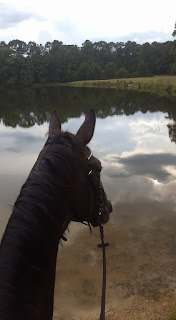 Then because it's a long holiday weekend and I had to start it out right, ... I couldn't resist and went for a hack with Kelli and Judy and then a jump around. Danny started out pretty good on the trails even though I could tell he wanted to go! Then they started the sprinklers up again. And Danny got up! Not horrible, but up. And Arwyn was being naughty, so we turned around. Well, Danny kept bouncing up in the air but he held it together. Arwyn was being a twit too, so... we decided to have me go on ahead and let Dan move and Kelli and Judy stayed behind so Arwyn could stop and think. I made Dan walk to the bridge and cross it and then I let him trot up the little hill, over the dam, and up to the XC field. I was thinking we'd go for a gallop but I wanted to make sure no one was in the field. Good thing because Julie and her friend were. We said hi and then they headed to the woods so I let Dan have a trot up the hill to give them time and then I let him gallop. But he was like "meh... I'll just politely canter instead". Really??? What happened to the fire breathing dragon I had in the woods?! Guess he just needed to go somewhere and move and that was all he needed. I hopped him over 3 fences and then we met up with Sandy and chatted til Judy and Kelli showed back up. Then we headed to the arena and did some jumping. He was a very good boy, if not a little lazy today. He cracks me up as he knows when he lands on the wrong lead that I'm going to ask him to swap so he does this split second simple change. Hee hee. What a good boy. Sometimes I don't even have to ask him.

So it was a fun day. Now back to the books! 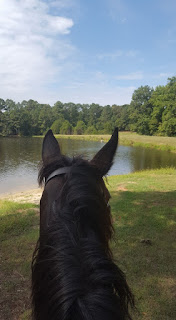 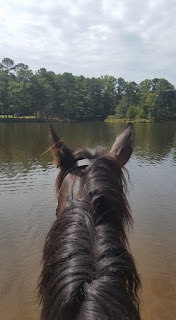 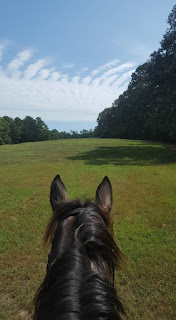