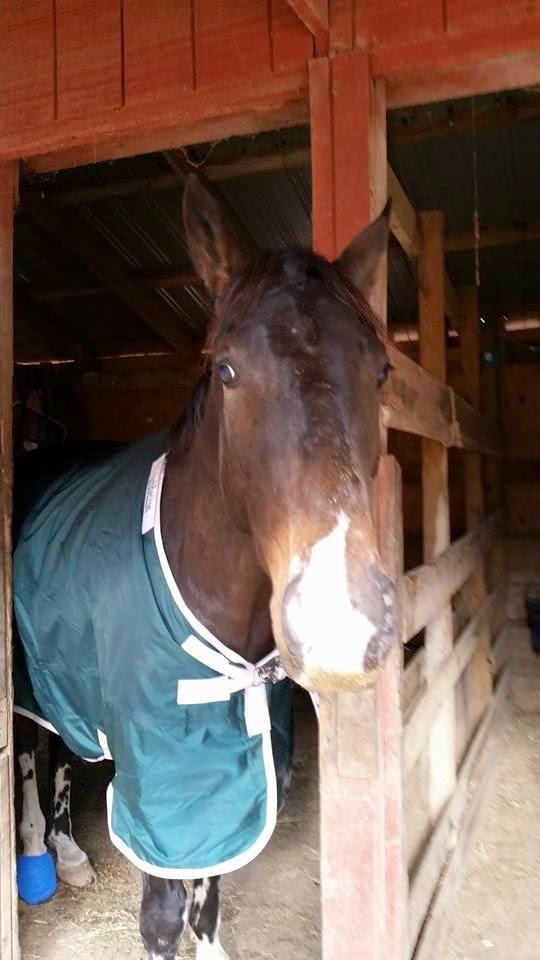 Danaroo is lame. :( Super lame. :( I'm hoping and praying that it's an abscess. I took him and Fleck to Ashland on Tuesday and rode Fleck first. I pulled Dan out and got on. It's been about a week again. Sigh, poor kid. And he was a bit sassy because there was a lot going on at Ashland being that it was a holiday week. He reared up a bit and we did a little bit of in hand work before I got on. Then I got on and he was pretty good but a bit sassy. There was people jumping in the jump ring and he could catch glimpses of them. At one point he let out a really loud alarm snort/blow thing and the people by the trailers stopped and looked. And then he bucked. ;) hee hee. Silly baby.

I managed to get him working and he was good. We did some trotting and worked on our lateral work. It was probably his best leg yields at the trot ever! So then we took a breather and I asked for the right lead canter. He was running but wouldn't pick it up and would scramble into the left lead. We tried about 3 times and then I took him left and let him canter. Then we tried going to the right again and he still wouldn't get it. After he ran into the left lead I brought him down to a trot and then I felt a lameness. I swear I didn't feel it before, but he was being sort of naughty so sometimes it's hard to tell because legs are going everywhere! Hmmm.... I trotted him a bit more and didn't really feel it. So then I walked some and then picked up the trot again and now I could feel it. I brought him back down to the walk and now I could even feel it at the walk. Weird....

So I got off and lunged him and going to the right he was super lame and super short strided. Good grief! So we went home and figured I'd see how he was in the morning. While I was feeding Fleck chased him down the hill and he scrambled and then he was REALLY lame. Dangit Fleck. :( Poor dude. So he got some bute. I was thinking it may have been a pulled muscle from playing in the mud. ??? It was just weird that it got so bad so quickly. And he didn't do anything under saddle that would make me think he'd hurt himself. There wasn't any slipping or even spins.

So then the next morning he was still pretty lame and really hesitant to walk up the hill. It's hard to tell if it's up high or in his foot. I didn't feel any heat or notice any swelling. Boo.....
The next morning I picked up his foot and picked it out and smelled something horrible. Like abscess! Yay!! But I only got a whiff and never found a spot. I put on a pad with iodine and wrapped his foot. He was holding it way up high and waving it around for about 5 minutes before he put it down. So now I'm hoping it's an abscess and he's sore in his foot and not a pulled muscle up high. Poor little dude... He's so owie but he still wants to play.

And the poor kid. He really was trying to get that right lead canter. Bless his little heart. I hope he feels better soon. If not, we'll go see Dr. Brown on Monday if we can.
Posted by Holly at 5:48 PM