So.... this little munchkin is going to be SOOOO MUCH FUN!!!! I seriously cannot wait!! We went trail riding today and he was a champ. He loaded right up, hauled great and unload like a pro. He stayed tied to the trailer and grazed on some grass while I groomed him and Fleck. Then we saddled Fleck up and off we went. He was a little frisky but Fleck kept him in line.

We had the whole place to ourselves so we took advantage of the XC course. There's a lovely water pond that's perfect for introductions. We walked down and in and Dan stood there at the edge. After about a minute he nibbled the grass, stuck his front feet in, pawed, and then ate the grass and sucked down some water. Then that turned to playing in the water with his muzzle and more pawing and before he knew it, he was in with all four feet! We let him play a bit and then walked out and back in and out again. After that it was no sweat.. he went right on it. Then he even went up and out over the little baby bank!! Going down it was tricky and required some thinking. Rather than push it I stopped and just went back in and out the up bank. He's only one!!! ;) 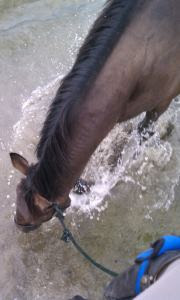 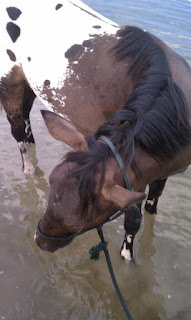 So then we walked over to the baby ditch. And Mr. Dan jumped it!! And was all proud of himself and prancy. Sooo freakin' cute. Then we went back over it again and same thing. He was all "whoo hoo, did you see what I just did?!, Aren't I cool?!". hee hee.. Poor Flecky.. he was getting annoyed with the young whipper snapper. Hee hee... So then we trotted.. yes trotted! over to the bank complex. He walked right up the bank (maybe BN size) and then turned and leapt right off. Hee hee... Also super proud of himself and prancy. We did that twice and then took off for the trails. 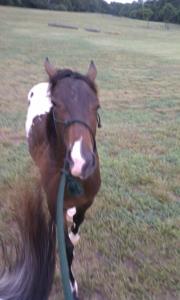 (Ha ha... Poor Dan.. I can't decide if he was purposely staying there so he could use Fleck's tail as a fly swatter or not, but that's what happened! heehee...)

He was great on the trails and Fleck kept him in check. We even did a good chunk of trotting because the bugs got a little bit thick. At one point he tried to stop and crossed his front legs at the chest trying to get a horsefly. Poor baby! So we carried on at a trot trying to get rid of those pesky flies. Then the thunder really started rumbling so we finally found our way and headed in. But we did some more trotting and he and Fleck stayed side by side. :) Then we jumped over a teeny little log. Hee hee... That boy is so cute. Fleck calmly walked over it but Dan has to lean back and launch over it like a "real" jump. He cracks me up. Then I had to talk him down again...  He's just so proud of himself. As he should be. Both boys got a lot of praise. 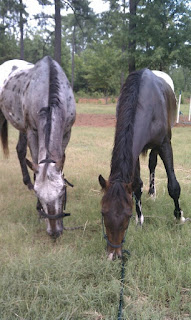 Then he stood tied to the trailer while Fleck was untacked and hosed and didn't even worry when Fleck walked off a bit. Then he got a rinse and behaved well and then got to graze for a little bit. They both self loaded and we headed back home.