So.. this week was crazyness!! We had a lesson Tuesday with Cindy and tried the epiphany again after my lesson. I also tried the 17.5 inch seat, but I like the 17 inch seat better. So yay! Done deal. Chocolate brown :) Now to wait 3 months and try to sell both of my dressage saddles to help pay for it. :) And honestly, at this point I'm so brain fried that I can't remember much about my lesson. Ugh..

So then Thursday I worked instead of taking the day off since I took the day off Friday to go to Chatt and XC school with Liz and show.

So... Friday we went to Chatt and XC schooled. Danny was a bit on edge and after having a light week, he needed a run. So once we got out there I let him gallop a hair. I kept him in check and didn't let him go full out because I didn't want to overdo it or have him hurt himself. We still had to school XC and then do a one day the next day. And it was our first novice! So I kept him under wraps but let him gallop. We still clocked at 27 mph. And he was cross cantering/galloping some. And then we schooled. I felt a little bit like I was cheating because I jumped all but the last two novice fences. But you know... it's been 10 months since our last event and we have never done novice at a show and we've only XC schooled at Gibbs, cedar ridge and then ashland, so... I felt like that it was putting money in the bank more than cheating. ;) We had to jump them all individually for the most part because of other people schooling but it was okay. We did one or two training tables for fun. He was good! We jumped the up bank to the table out and as we came up to the novice one, he spooked at the training log stack next to it, so I figured we could just continue up the BN bank and out and then we circled around and jumped the novice one and he was fine. Hee hee. Then they had a nice table with wings on the side (kind of like up in the air wings, so... half a keyhole in a way) and I joked that I kind of wanted to jump that. Turns out, it was on the novice course (shared with training) so... I did. :) I let Dan walk up and see it and then we circled and he jumped right on over it like it was nothing :) Yay!

So then I iced him and wrapped him and walked him some after dinner and went to bed. Saturday was so freakin' hot!!! It was sweltering! And it's only June! So he mostly stayed in his stall with the fans. 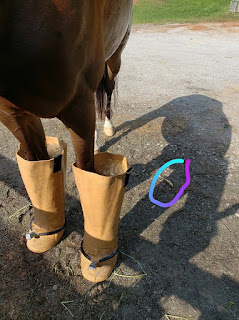 Dressage was good. He warmed up nicely but one of us was hanging on the right rein. Our test went better than warm up I thought! I thought it was quite a nice test. We scored a 32.6 which put us 4th out of 7. Oops. Oh well.

Stadium was tough.  That was a really hard time for me. The fences looked HUGE compared to what I was expecting although once we started on course, they didn't necessarily look as big. But my eye was off. I kept riding him and then checking and half halting and shutting him down and/or burying him under the big fences. He was getting pissed at me. I thought maybe it was the tight warm up space but even on course I did it. Granted it was a tight course and the jumps came up super quick. I just couldn't get in the groove. I think I managed one decent fence out of all 9. Ugh. Danny was a saint and got us out of all of them with no rails. But he was mad!! He tried to spook at someone hitching their trailer and bolt up the hill to the barn. Sigh... 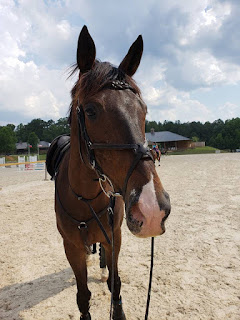 But we finished on a great note! We had one warm up fence on XC and then headed out. It was great. He was super and I was able to get my eye to cooperate a bit more. We only had a few funky fences. He was brave and bold and went right in the water! He tried to drift out of the V jump but once I closed my leg, he was like "oh, okay then" and politely went to it. We finished JUST before speed faults and had to zig zag a good bit before the second to last fence but we had fun!! Yahoo!!!!

We finished in 3rd place on our dressage score. :) Yay!
I'm so bummed as my helmet cam didn't cooperate and it should have been recording but there were "SD card issues". Ugh.. Drats.. So the only video I got was one schooling over the V and then my terrible stadium round. Oh well. :)