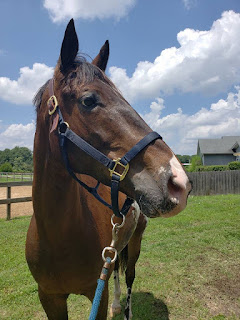 So.. today we did something different. :) We went to Dana Clarks place for a lesson with Leif Aho. He trained with Mary Wanless and is big into biomechanics. I was excited!

I ended up having the boys in all day yesterday because it was so hot so I turned them out last night. And I knew Danny would be muddy. So he got a bath this morning and then I left him in his stall for a bit while I went to watch the beginning of the clinic. It was neat! I like Leif. I was able to watch all of Nikki's ride, some of Dana's and most of Peri's before I had to go get Dan. Pam was there too but had gotten her truck and trailer stuck. I was paranoid and threatened to park in the church next door and walk over. But I didn't. I took Nikki's spot after she left and stayed on high ground. We've just had SOOOOOO much rain lately. So anyways... I got Dan there and he was a bit alert but not bad, since it was a new place. We had gotten on and were just starting to let him look around when the two truck pulled up. So... props to the kid because he held it together while they wrenched her truck out. They couldn't get her trailer. So I kept walking him around. Dana has 3 sets of mirrors in her arena. Danny was funny. He'd look at himself and then try to peer behind the mirror. Hee hee. Then we started to trot and he was hilarious!! He'd see himself in the mirror and head that way, then catch himself in the corner of his eye in the other mirror and whirl around like "where'd he come from" and then catch the other mirror and turn the other way. Hee hee. He was funny. So then he got himself all worked up and was doing his springs imitation. My post was lasting about 12 seconds each post. Hee hee. Lots of up and down but very little forward. Of course after about 6 laps he got bored and we just went to work. :) 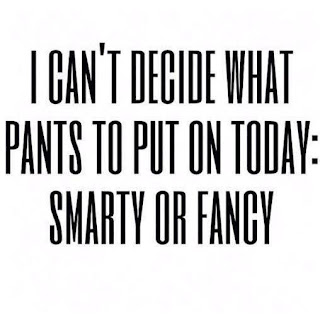 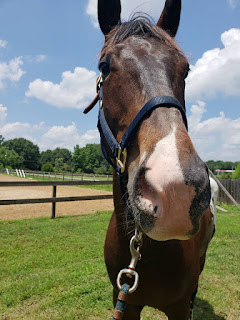 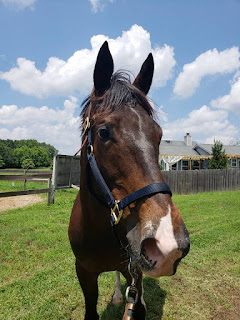 Leif changed a few things, which was tough. Not so much tough in theory.. just tough to change my body memory and tough a little bit because of how my body is built. He had me bring my lower leg back a bit so that my leg was more underneath me and had me drape more thigh on Danny, rather than just calf. He also wanted me to open my knees a little but not pinch with them, but keep my upper thigh on the saddle. Then he wanted me to just rise a bit more in the up part of the trot. Which... was a little tricky because as I rode in the saddle, with my legs a bit more behind me, I was tipping and it wasn't allowing my hips to open as well as they should have. But I tried it. Not sure how successful I was, but we tried.

We also discussed how I allow that right side of his to get longer and longer. So Leif had me picture two things or rebar up the back of my shoulders and two up the front of my shoulders. He said to keep the right hind rebar nice and straight because I was collapsing my right side and allowing those muscles to be weak and thus allowing Dan to just get longer and weaker. And to keep my elbow attached to my side. So basically... the magic bullet Cindy had taught me that I have to keep fighting to maintain and work against body habit. So that helped a bit. He also suggested that I don't overturn my body (hmm..... I am positive Cindy has said that too!) in the turns and instead almost turn a little to the left when turning right and vice versa. Oh, and another helpful image he added was to picture vaulting handles just in front of my saddle and have my pull the right one to the right to get Dan to turn right. It was a helpful analogy. 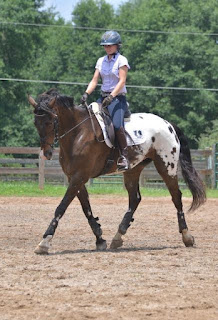 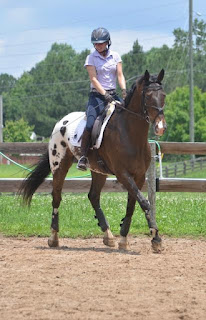 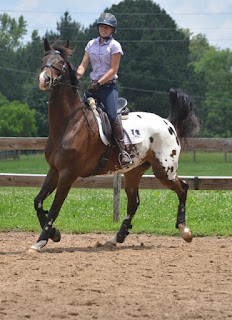 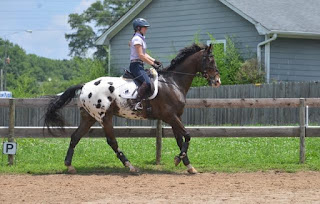 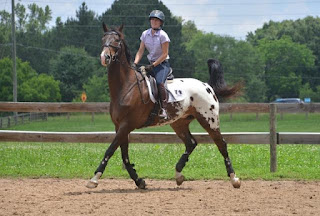 So anyways... we worked on my alignment a bit, thus getting Danny straighter, and then we went on to the squigglies. The goal of this is to keep Danny's shoulders evenly "fluffed". Or "Stuffed". So.. a stuffed animal should have firm fluffed/stuffed arms on both sides. Dan's shoulders and contact in the bridle should also be evenly stuffed. When he bulges out the right shoulder, he's unstuffing the left shoulder blade and rein. So the squigglies helps keep that stuffing even. So... at the walk, trot, and canter, we would turn right, then turn left, then turn right, then turn left, etc. The goal was to get them to lift their shoulders and turn in the front, and the back would naturally follow. But he had to stay evenly fluffed. And it was a helpful way to think about it and to see the holes. When we turned left, a few times I could feel Danny just tip over that left shoulder rather than lifting it out of the way. So yeah.. Pretty helpful. And at the canter, it was a great tool, because it helped me realize that to improve my counter canter, Danny has to allow me to touch both reins and to keep both sides fluffed. He wants to swap every time I touch the outside rein because I'm throwing him off balance. So... this will help us realize that he can turn R and L within the canter and doesn't have to swap his leads. Leif said that if he does swap, to just get him back into the canter and carry on. No punishment, as it's not a true disobedience.. he was just offering an answer to a question I didn't meant to ask. (Again... Sounds like Cindy). So... yep. It was an interesting ride. I feel like I got some good takeaways. And Danny was good in a new place. 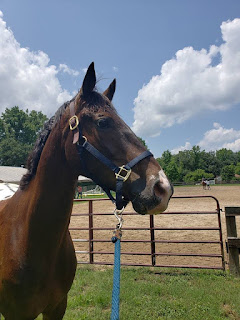 After I walked him out a bit and we were able to open and close Dana's gate. He even closed it with his nose. Hee hee. Then I had him tied to the trailer for a bit and I was bragging on him as Dana and Sherry were impressed he'd stay there. And not 2 minutes later he got all animated and starting dancing at the end of the lead rope. I knew it was coming and sure enough... he pawed it with his foot and broke the haystring and went running around. He let me catch him quickly though and then he got put in the trailer.