Guess how we finished?!?

Ha ha... I'm terrible! But for reals... Dan WON ANOTHER EVENT!!! So... this makes 4 first places in the 5 recognized events he's entered. The one he didn't get first at, he got 3rd, but if you take out the two pro's ahead of us, we got first. And he also got first at the schooling show in between two of the recognized that we did. :) I have an amazing baby spotty!!!

So.. the details :) Because it's not about the end result, but the journey and the fun getting there. :)

So.. I posted about Friday, but... Saturday and Sunday was a completely reformed spotted baby t-rex! Auntie Beth turned us into spotted ballerina's!! And I actually think Danny is getting the hang of horse showing. He's turning into a proper horse. ;) Ha!! Not quite... But he's not charging out of his stall (although I do only clean it while he's eating grain or soaked hay cubes), he's napping, and... well... he still is stealing stuff from peoples stall fronts if it's in his reach and he also pulled his halter into his stall and played with it. And he did steal his neighbors hay through the stall wall, but... he's getting better!!! I think. ;) 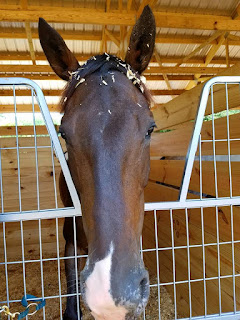 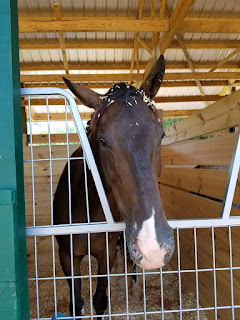 Saturday he walked calmly down to the dressage arena without any antics. And then he warmed up nicely. He felt really good. We worked on the same stuff we did the day before and worked on our transitions. Today it was very much keeping my right elbow at my side, my left rein connected and wide, and my shoulders up to keep his shoulders up. :) I think it worked :) We ended up having a VERY nice test!! I was really happy with it really. Looking at the video, there was some things we could tweak, but overall, it was a nice test. We ended up with a 23.3!! Which put us in first in our division of 12. Beth had the same judge and she ended up with a 23.0 and first out of 14. So... we would have been 2nd out of 26. :) I'll take it. :) 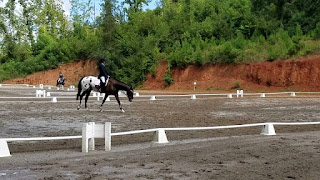 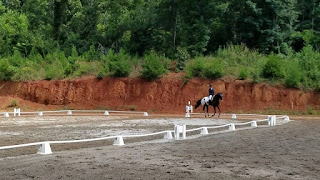 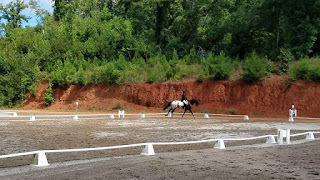 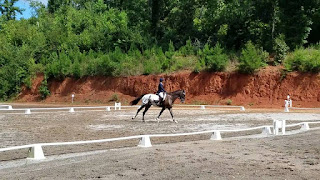 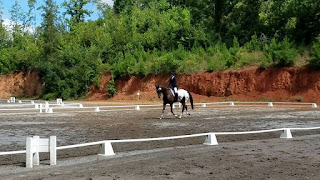 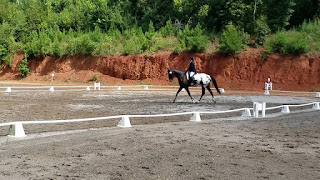 So then Dan took a good long nap. He was so cute.. he was snoring it seemed like but he woke up before I could get my phone back from Beth. He was resting up for stadium. :) Which is good because it was a tough course. Lots of terrain and terrain questions. But it looked fun! We warmed up well and I actually think I'm starting to get a better feel for keeping the pace and energy without letting Dan get longer! We had a really nice warm up. And then.... I lost it in stadium. I understand now why Beth is telling me to shorten my reins. I let him get long and lopey and didn't keep my leg on and keep the energy. He saved my butt over one for sure and at least two more that could have been close calls. Such a good boy. But I do feel like that even though it wasn't as pretty and smooth as it could have been, it was partly because I was riding better. Or at least TRYING to ride better. I think had I gone in and just let him lope around, we would have gone clear and it would have been a smoother round at first glance. But it wouldn't have been good training for later in life when the fences are bigger. So...even though I flubbed it up some, I also felt like I got it right at the end and I think that Dan was jumping better! We managed to go clean despite me, so yahoo!!

Dan's stadium round, saving my bacon! 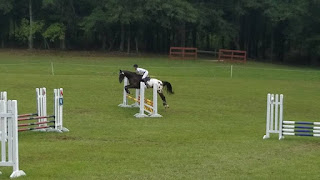 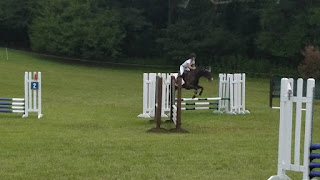 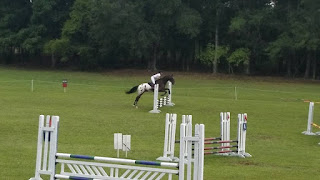 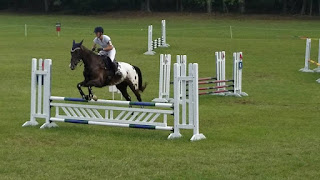 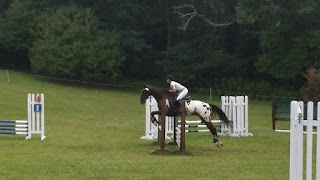 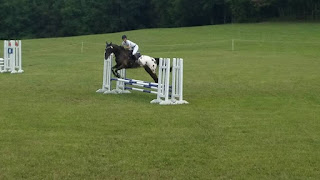 So.... that night Beth wanted to go to Tryon to watch the jumper prix they had. It sounded like a blast so we did. :) I decided I had to go shower first because I was so tired of being hot and sweaty so I did. Turns out the power was out in the hotel so I had to shower in the dark and hot, but... at least I was clean. I came back and got Helen and her Mom and then we all drove to Tryon. It is pretty freakin' impressive! It really is like Disney! It's gonna be crazy in two weeks!! It was fun watching the jumpers though. Afterwards I took Helen and her mom back and grazed Dan a bit. There was supposed to be a meteor shower but I didn't see a single shooting star. :( And the stars were amazing out there. I think I saw the milky way. :)

So anyways... Sunday was also hot and miserable. Ugh... But we persevered and had a blast!! The course was probably the most technical course we have done and he was great!!! First though, I almost fell off before we even started. ;) As we were walking up to warm up a loose horse came galloping past. Dan stood still and was fine but his heart started pounding hard for a minute or two. He settled though and so I asked him to walk on so we could go warm up and he just went straight up!! I almost fell off the back side. ;) hee hee. After that he was just fine. We warmed up and did our turn on the forehand and haunches. Beth went and rode and went clean so she won her division!!! Whoo hoo. She came back to finish warm me up. It was helpful! She had me get him in a small tiny collected canter and get him to the base of a jump. So then she had me let him get a little bigger but still keep him to the base. It didn't work... BUT... I really FELT him get low in the shoulders and lengthen and flop over it. So SHOULDERS UP and I kept him to the base with his shoulders up in a slightly bigger stride. Then we came again in an even bigger stride and I kept him to the base and it was lovely!!! I get it!!!! Now to keep it. ;)

So... off we went. We walked down and got in the box and the lovely volunteer started the countdown and... 3,2,1, go.... and Dan wouldn't go. He was just standing there. Beth was like "Spank him"!. So I did... and off we went. Turns out he wasn't just being Irish and doing his "I'm not moving"... he was pooping. Ooops. But still Dan... Although in retrospect, he probably could have spent 30 seconds pooping and still have been fine on time. ;) The first fence was easy and then he spooked at a horse coming towards home so our second fence was slightly wonky as we moved off our line. ;) But he was fine and locked back on. The first four fences were great. He was forward and pulling a little but not running away with me. He was "on the muscle" but listening. Pulling, but listening. :) I'll take it. The 5th fence was a ramp on an uphill slope that he was super game to. Then an S turn to a cabin. Then down the hill and then up the hill in the woods. He started to get a little bolty up the hill so I had to make a hard half halt. Because at the top of the hill, once it opened up, we had to turn sharp right to a half coffin. It wasn't a real ditch though, just two fat short logs on the ground. He was game to both and then it was to the water! He jumped the fun hanging log and we turned towards the water. I let him see it for awhile so I kept him at the canter. He cantered right in although he did squirt to the outside a little but went. He jumped the jump out and then it got technical. We had to do a downhill turn to a tiny little cabin, then a sharp right hand turn to a bank on the top of an uphill slope, then a sharp right turn to a big brush steeplechase fence. Then it was three easy fences home. Dan was great and really sat down and listened to me and jumped the cabin very politely so we could make a polite turn up the bank. He kept right up the bank and then we clocked on over the steeplechase fence. Yay!!! We were coming in a bit under optimum, so... we held a very polite canter over the last two fences.

Yahoo!!! We finished first. :) And turns out, our team (Me, Beth and Helen (who finished 8th in Beth's division) won the team challenge. :) So whooo hooo!!!! 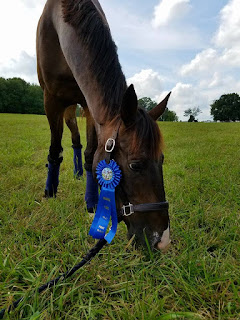 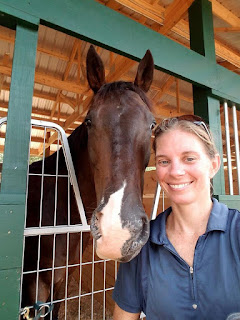 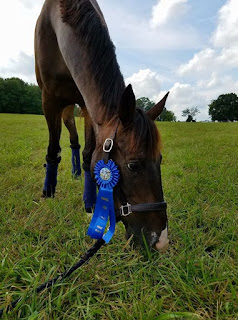 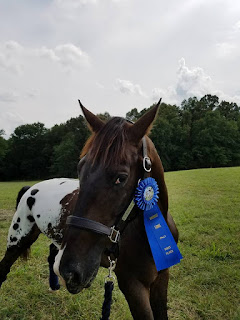 (Yes, he was peeing, but he wouldn't pose for me and I was getting annoyed that he wouldn't keep his head out of the grass, so.... ha!)