This weekend was nice in some ways. I ended up not showing at the Horse Park, which was a good choice. I just needed to catch up on some life stuff.

Saturday Mike and I tried to go sailing but it was WAY too windy!! The sails were whipping like crazy and we couldn't get them set. So we headed home but had to stop and visit with his Mom a bit first. Then we had lunch. So it was almost 5 before I was able to get on, but at least I got to ride! We went for a little hack in the jump saddle because I figured he might be a bit rowdy with the wind. He was good though! We had a little 3 mile loop through the woods and trotted and cantered some. But then I wanted to work on some from my dressage lessons, so we headed back and swapped saddles. And then we did some dressage work. He was lovely but for some reason we couldn't get our left lead from the trot. Argh... I'm not sure how I'm throwing him off, but I know I am. He wants to pick up the correct lead but I keep throwing him off somehow. Sigh. But we figured it out eventually and managed to get it right two or three times in a row. And he felt really good. :) 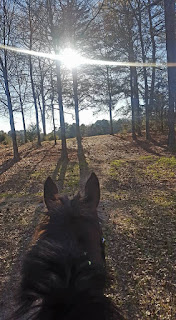 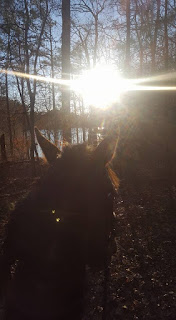 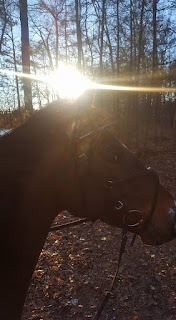 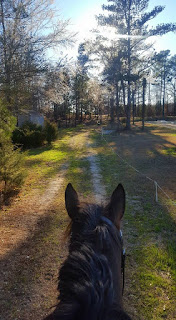 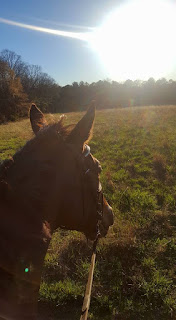 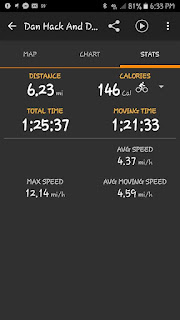 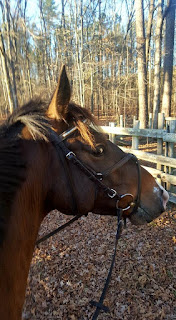 Sunday was a nice relaxing day. I was able to finish the last of my reports in the morning and then we went to ride. I met up with Missy and Indy and we jumped a bit and then went on a nice hack. It was fun. Danny felt really lazy and just like he wanted to laze around in his pj's all day. Me too Buddy, me too! But looking at the videos, he was a good boy. And I was quite proud of him through the grid too. :) And he trotted right down the bank into the water and then even cantered down it. And then later we cantered over the log and down the down bank not into water. :) 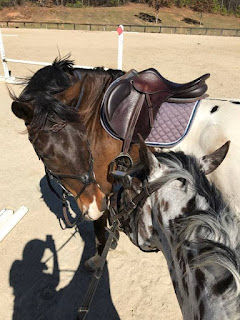 Here's the videos Missy took of us :)
Bounce to the one stride
Cantering down the bank into water
Oxer to Coop
Oxer to Coop to Grid
Oxer to Coop

So all in all, not a bad weekend. Next weekend we'll play Saturday and then go school XC at Fence!!