Tonight I took Danny to Christina's for a field trip. Her boarder has done a lot of work with the babies so she's very helpful. And I don't really have anyone here to help me, so... I took advantage. Danny loaded right up with no hesitation despite being the only one on the trailer. We got to Christinas and he said hi to May and Sham and then patiently waited his turn tied to the trailer while Christina rode May. 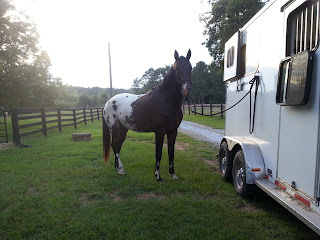 Then I tacked him up and it was his turn. He was much more animated today! But in a good way. He was pretty darn good and walked on well. Stopping was a bit tougher today. He was pretty fussy about it and it took a little bit of time, but he did stop. He was very distracted! Soooooo ADD. He spooked at the plank jump but walked right up to it and sniffed it and was cool. He was very distracted and kept staring at Christina. Hee hee. But turning was pretty good. 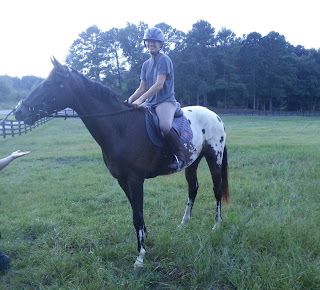 Then Christina said "I think you should try the T R O T"... so I did. I basically just closed my leg and said "annnnnnd troooot"! and... he did. :) He did about 5 steps then tripped. Hee hee. Poor kid. But what a good boy. We did it two or three more times, just a few steps each time and then got a good halt and quit. His little brain was just about done for by that point with all the other distractions, so it was a good place to quit. 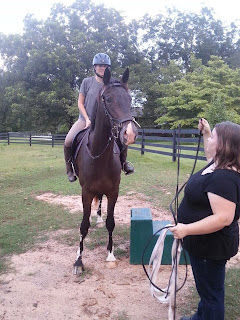 I did decide to try trotting him in hand and he was decent but very hyper. He was very polite with his rears and bounces though. ;) They weren't real rears.. more just bouncing. Saturday is going to be fun. ;)

I do love this kid though...

Oh, and.. he kept trying to stop and sniff poop... just like Fleck. And then when I unloaded him.. he immediately peed! Man.. I love how clean he likes to stay! :) 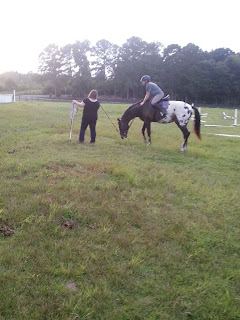 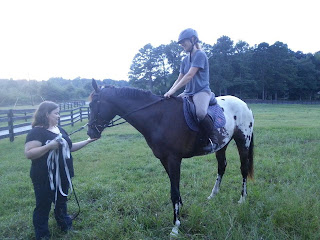 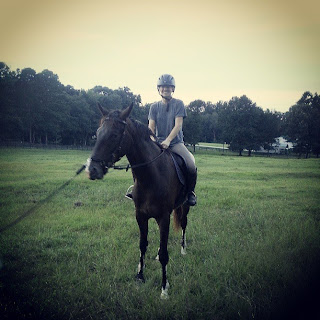