Another success!!! Man I love this Kid! 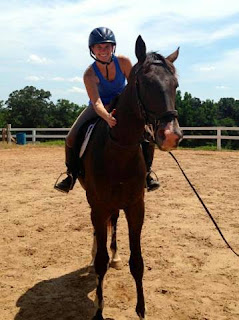 He tacked up well other than constantly trying to chew on my reins. I swear, that kid has such a mouth on him!! He lips me constantly too but so far he hasn't used his teeth. Just... wiggly lips. I was just giggling at him while tacking up. He's just like Fleck! :) :) :) 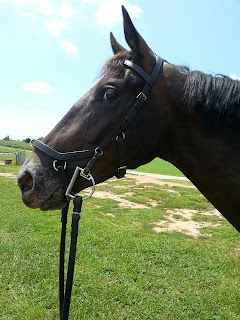 He was perfectly fine for me to get on and didn't even react. Honestly, I'd say that he was too distracted by the other horses and trying to eat his lead rope to realize I was up there, but... I think it's more that he just didn't care. I think I can safely and proudly say that I did my homework and he didn't care. :) I was able to get on after a minute of waving around and hanging over him. Then we worked on the basics again. Steering, stopping, and going. Beth told me this time to bump him gently with my heels if he wasn't responding to gentle leg pressure. I asked why, because I had thought that we didn't want to have to increase the "ask". She explained that yes, I was correct in that sense. But that I wasn't bumping him with force... only the same pressure as the constant leg. But because he was so distracted, the constant leg was unnoticeable to him. So the bump was a "wake up" and then I closed my leg. Aha! Makes sense.

He was awfully fussy and flingy with his head but I think he was just bored and distracted. We were able to do lots of transitions and even turns. Beth even let us farther out on the long line and we went to the rail and then did a tear drop turn in to her to change directions. He was so good! 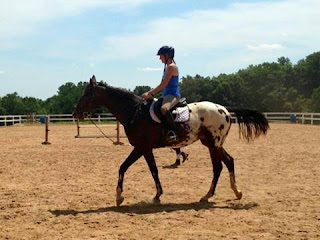 So proud of my little man. And so excited about him. I can't wait!!! It's going to be very hard to take it slow and easy with him. 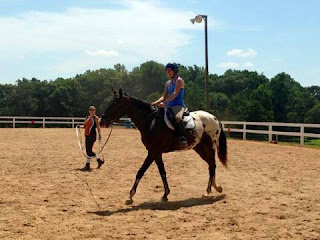