I have the best kid ever!!! 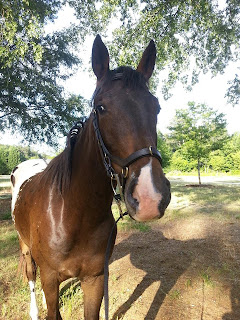 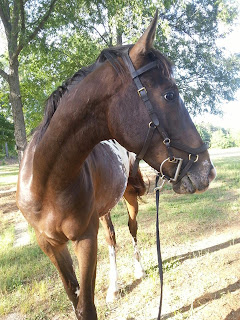 Seriously.. this kid is awesome! We went to Ashland again today to play and he was a star. He loaded up by himself and stood on the trailer like a champ. We groomed and put on his surcingle and long lines and off we went. I still had to lead him down the dam road between the two lakes but after that, he was off. The blue heron (or egret.. whichever it was) made him look but he didn't jump. He's really getting the voice commands too, though he still wants to trot more than I do. And someone had put up standards in the XC field and it was funny. He backed off but then was brave and went through them. We walked into and out of the water. And then we went over the ditches. Hee hee. He was all snorty at first but then was like "look ma!" and walked through them like a champ. And then he did the bridges just fine. We got to the water and he was so cute. He was a little apprehensive but with some encouragement he put on his big boy pants and walked right on through. Then we were trotting along and were going past the slippery water crossing. He stopped and looked at it. And he was going for it... so I let him. He walked carefully over it and was so proud. I had to praise him. It was like his brain said "hmmm... I get "Good boys" when I go through things, so... lets' go through this". Such a cutie. So we went back through it and continued on our way. He was really doing so well. So then we headed to the lake and came to it from the back side. He didn't mind walking between the lake and the valley, so... who knows why the first dam walk bothers him. But he was trotting on and then we saw Judy and Cash in the lake. He was so excited. He behaved for me to untack him and then he went in the water to splash around. About that time Judy decided to do go some work and left. Well poor Dan had a fit! He was so sad that his friend left. So he took off in circles around me, bucking and carrying on. Hee hee. He respected the lead though and didn't try to bolt. He was just mad! Once he got it out of his system, he went back to playing in the water a bit. Then we walked back through the XC field and trotted two little logs and went down the bank. Then he even went down the bank into the water and then up the bank out of the water. 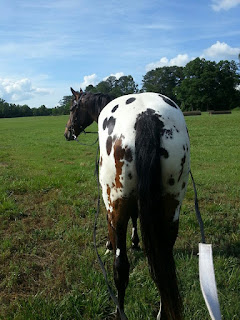 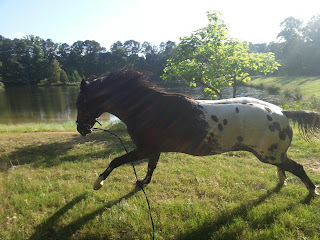 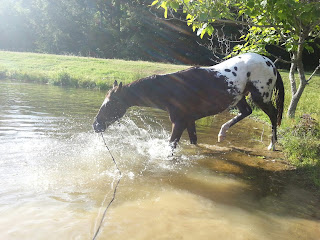 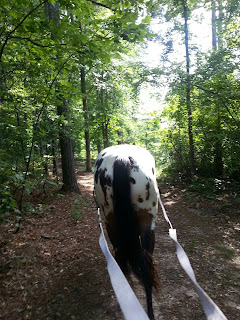 Again.. I'm just so proud of him. He got his rinse and then a good graze and then loaded up just fine to go home. He's gonna be so much fun!!!
Posted by Holly at 8:06 PM