So... poor lonely bored little Dan... Between the flu, the weather, and work, I haven't had time to much with the Squirt. So today, since it was gorgeous, I decided that today was the day to get back to it! So, I headed out to the back to play with Dan. And Dan was running amok! He came galloping up and was being silly. I got video!

So then we went down to the round pen to work. Since he was running around already I decided to just do a short session so I just put the lunge cavesson on without the surcingle. And he was great. He walked on, and trotted, and walked, and whoa'ed. Just happy as a clam. And he was stretching down too. Lovely! So then I thought... well, now what?! So I dropped the line and walked around trying to find a long stick to use as a "jump". And Dan followed me!!! I'm not sure, but I think we "joined up"!! So maybe I am doing it right :) So I set up a stick in the fence line and propped it up on a bucket. Hee hee. It was maybe a foot tall. I hand led Dan over it and he walked over it. Then I trotted him over it in hand and he jumped it. I praised him and then we tried it while lunging. He did great going to the left but not so much going to the right. He kept skirting around it. So I hand led him over again and then he jumped it. GOOD BOY!! Lots of praise. So then I figured I'd try once more to the left and... turd ball tried to bite it and then tripped over it. So we tried again and he picked it up in his mouth! hee hee... Goober!!! So we had to do it right both directions again and finally managed that. Then I unhooked him completely and he still followed me around. So I trotted over the jump and he followed me, completely naked. We did it both directions. 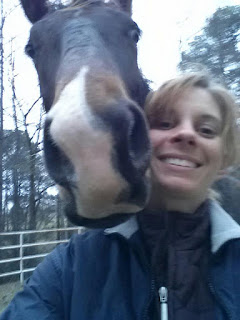 I love my guy!!!!! Maybe Saturday if the weather cooperates we'll head over to Ashland for a pony ride or for some in hand playing. 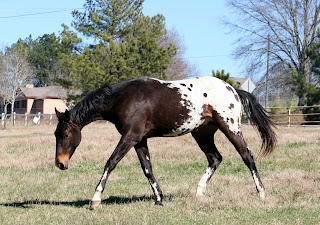 (This photo wasn't today but this was how he was lunging!)