Today was supposed to be a cross country day with Fleck, but... poor guy had an abscess brewing so we headed back home. Since it was such a beautiful day I decided to go back home and bring Danny out. Especially since he was so sad when I took Fleck off this morning. So... that's what we did. And we had a blast!!! 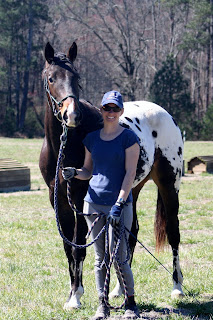 He loaded right up and hauled great. When we got to Ashland he was so anxious to get off the trailer that he sat on the butt bar and came flying out. So we loaded right back up, stood, and then unloaded calmly and quietly off the trailer. That's a good baby. So we headed out to the cross country field. I started with just the rope halter but took his chifney bit too, just in case! So we headed out and came upon the girls I was supposed to be riding Fleck with. They oohed and aahed over Dan and then... he reared straight up and pawed the air!!! Twit!!! As soon as he came down... on went the chifney bit. He stayed on all four feet after that and we chatted briefly. Then they all headed in and Dan and I headed to the water complex. He didn't really care that they were all leaving him and we tipped his toes into the water. He didn't barge right in but I wasn't ready to get my feet wet yet. So then we headed to the ditches. They were filled with water from all the rain so we walked over the "faux ditch" and he leapt over. We did it twice more with him calming down and then moved onto the baby ditch and then the beginner novice ditch. He did them all! He jumped them all instead of walking through them, but still. He went willing and happily. He leapt for joy, not because he was afraid. So then we went to the banks. He walked right up the little bank and right back down. I almost took him up the next size one but.. it was a little big for a not yet 2 year old. So we did the small one a few times. He was showing off and one of the times coming down, he leapt off and bucked at the same time. Goober!! Upon landing I was glad for the chifney. It's just a bit in his mouth when I don't need it, but when I do, it's a little bit more control. So then we walked back up and WALKED back down. Good baby! 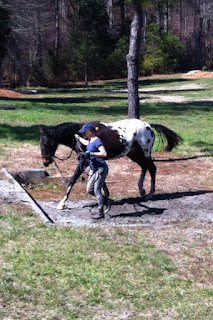 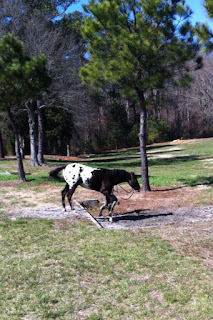 I then trotted him over a few logs. He did great, but because I trot with him, he always lands and drifts left back to me. I meant to bring my lunge line so I could send him over it, but I forgot. Oh well. So then I switched to the right side and had him jump another log. Then we went back to the water. At this point, I was pretty much done, so I figured I could get wet. As we were heading over a friend was out riding and cantered a lap around the edge of the field. Danny was on high alert! He was as tall as he could be and his tail was flipped up high! But he held his ground and didn't get in my space. So then after chatting for a bit, we headed to the water. He went right in and splashed around a good bit. Then he went up the bank and then back down the bank.. into the water!!! Such a superstar.

So then on the way back up to the trailers I let him on the right again and had him jump another log. He got quite carried away and tried to bolt, but the chifney held him. Sweet!! And without having to really get after him. I didn't even do anything really.. it does it's own work. I think I'm going to like this thing. I don't feel like I have to harass or nag him and he listens. I bet that after a few times with it, he won't need it anymore other than for an occasional reminder to keep it reined it.

So then we stopped at the ring on our way back and he walked straight through the puddle. On our way out we stopped at the mounting block and I made him stand next to it while I stood above him. He was distracted with the trailers and other horses but stood and behaved.  I fed him lots of cookies and carrots and groomed him and we headed home. He was a good pony and unloaded quite nicely this time.

This was taken this morning with the fog! 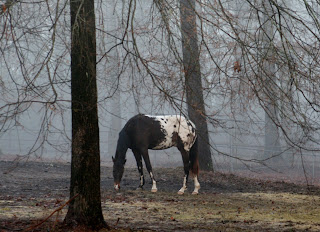