So.... we are back to work with Danaroo and he's got a new game :) It's called "stay with me and you get cookies... move too far ahead or behind and you get whacked with a lead rope". hee hee.... But really... if he stays by my shoulder... whether I speed up, slow down, turn, turn into him, stop, or do whatever.. he needs to learn to stay by my shoulder and match my pace and direction. If he does... he gets cookies and pets. If he doesn't... like he gets ahead of me... he runs into a twirling lead rope. I don't smack him with it... but he walks into it and smacks himself. I like this game!!! Dan, not as much. Ha! But really, he's getting the hang of it. So far we're really good at the walk. I'm aiming to translate it to the trot. I think it may help things. And... quite frankly, he's QUITE good about cookies... despite being a baby boy and oh so mouthy. So far, he's allowed to be fed cookies because he's being very good about it. Once he starts getting nippy he gets cut off.

So we've been playing that new game.... and then the "touch it" game. I hold something up or point to something and tell him to touch it... if he touches it with his nose, he gets praise and/or a cookie. He likes that game!

So yep.. it's back to work. We've done some more trail rides too and added in a bit more trotting and some logs. He's having fun. He's even starting to look around and notice his surroundings more. Rather than just chewing on Fleck. That makes Fleck happier too!

So yep... not too much excitement. But a happy boy! 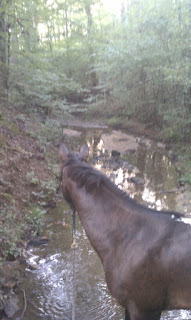 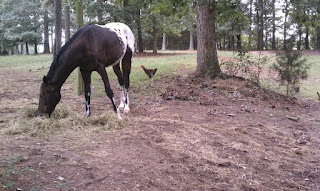 Oh, and the chickens are braver and out and about now, so Dan has learned about chickens... and presumably... Roosters!
Posted by Holly at 8:02 PM