Sigh..... Fighting a vicious battle of wanting to be better and improve vs not being pleased with my horse vs I suck vs it's hard to not be a tiger mom when I'm a tiger person....  just be happy with what I've got... but aiming for better is better? Right?! UGHHHHH

so sucked behind my leg... bobbing on the left rein..... couldn't get our crap together.  lots of spankings. one retaliation buck within a buck

finally got him going in front of my leg and it got better. But I still need to learn to release at the base of the fence right BEFORE take off... not right as he takes off. But manage to keep him connected until that point...and trotting if it's a trot fence. Also avoid the right drift on landing.

Finished with a bigger fence or two to see if he would jump better without inverting. He did. But likely more had to do with me releasing early enough. Oh, and counting helps. 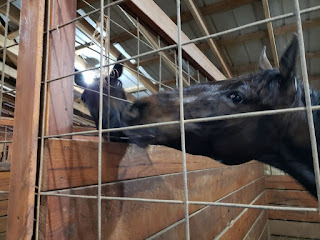 And he and Wilbur were having a bromance. They were playing kissy face and bitey face almost non-stop... until I pulled out the camera ;)
Posted by Holly at 7:49 PM