Alright... we've got some work to do! FEH is around the corner.. August 25th. And I plan to have Danny make his debut :) So... the other day we worked on pulling his mane. He didn't care one bit. Then we tried doing some triangle work. Yeah.. for some reason we can only manage to trot nicely for two sides of the triangle. The third lap always seems to turn into a canter/run thing. And he won't quit grabbing the lead rope in his mouth... which makes it really hard to pull him back down to a trot. Doh! OH well. He's learning. We'll figure it out.

Then we jumped a very small little vertical again. He cracks me up with jumping!!! He walks up to it.. and jumps!!! He won't just walk over it. YAY!! Jumper pony!

And lately he's been BORED!!! I use the muck buckets as the extra water trough and he's found out that it makes a cool new toy! He's ruined three now... so I bought a heavy duty one. Well, he hasn't ruined that one, but I can't keep it in place! I fill it up and by 12 hours later.. it's emptied and dragged halfway down the hill. I did get a great video of him playing with his tarp and his jolly ball. See baby horse.. THOSE are appropriate toys! Well, at least the jolly ball. :)

Danny plays with the tarp

Danny plays with his jolly ball

Anyways... more practice until we get it :) And we're also going to work on those darn clippers and the bath :) 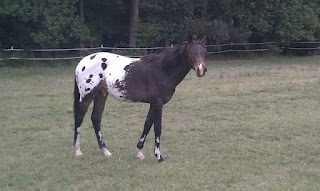 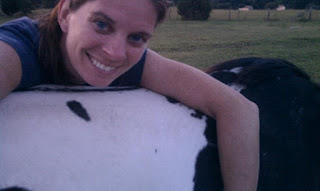