Today was a rainy day but luckily it was more drizzly than anything else and double lucky, Rana has a covered! We had a lesson at 2 and of course at 12:15 I noticed that Dan was black! I still had to finish my lunch and change my clothes and of course, by the time I did that, Dan was in the back farthest area. And then I had to pressure wash him off before our lesson. So we were running a bit later than I wanted. But we still managed to get on and be mostly warmed up.

We started off with the trot and working on keeping him bent and through. Basically he has to go a bit deep because otherwise he braces with that under neck. Not rolkur! Not behind the vertical.. he's got to be in the connection, just deep. He'll come up as he gets stronger. And he has to stay bent. When he gets straight in his neck... he instantly braces the underside of his neck and that immediately shuts down his hind legs and inverts his back. We practiced outside leg to inside hand. And we also went back to "uberschr...... something"... ha ha! Where I get him in the connection and then give one hand to check it. If he stays bent and round and going forward.. yay! If he flings sideways.. then I'm hanging and holding. I also did the stirrup stomp thing which helped. Basically where I almost stomp my foot into my stirrup to help me keep that leg long and loose. And I cannot cannot cannot use my inside spur!! Danny has decided that inside spur now means swap up front. Sigh. So I have to teach him how to bend around my inside seat bone and upper thigh.. because he can't bend around my inside spur anymore. So we got some nice work.

We also played with the turn on the forehand. Rana reminded me that it is the Ibuprofen of dressage. ha ha. If I'm correct, and time my inside leg aids with his barrel moving away from my leg (ie.. his inside hind coming up) and keep the outside connection and the inside bend... he comes onto the outside rein. I can do that a gabillion times in every ride if I need to.

We also worked on the canter and collecting it. Sigh. That is HARD! I need to keep my hips swinging and asking for canter while tightening with my core to signal collection and half halt to signal collection, but.. not have to keep my leg on to keep him going. And it's hard! Either my aids or too strong and he breaks or we don't accomplish any change. But... we maybe got the most infinitestimal amount of collection for a few strides today. And he's gotta stay round and bent! Then we went ahead and tried the half pass to the left. It was better than the day before I think. We actually got some sideways without losing the forward until the end. But I've got to keep the forward. And keep my elbows at my side.

So yep... still a work in progress. I've got to keep him round and forward and moving on his own so that I can just open and shut doors to create what I want. Vs working hard to create forward and then having nothing left with to finesse and fluff. But Rana did say that he did look MUCH sounder (and he felt much better today too, even from the get go) and that he seemed quite happy and content today. He wasn't fighting me. He wasn't giving it to me, but... when I insisted, he obliged. So yay!

And then, another happy moment of my day.... Kelli called to see how my lesson went and I told her much better. She said that she had talked to Rana and Rana had said that we had a good lesson today and that we were "Sooooooooooo close to 3rd". And also that she had fun riding Dan and was glad she did because I covered up so much of his problems. Which... I'm pretty sure was meant as a compliment... in other words... You couldn't tell the things he was doing to evade because I had hidden them and compensated for them. Yay! It made my day. BUT.. now to fix those holes that I've allowed so that instead of covering them up... they just don't exist :) 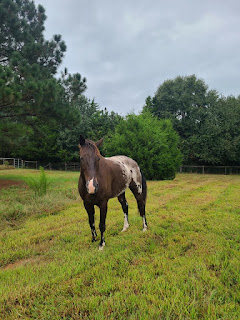