And I didn't even freak out!!! 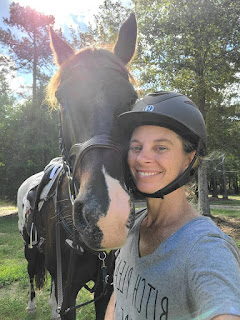 We finally had a jump lesson. Thank goodness the weather cooperated and Lucy didn't close the arenas! It was actually a gorgeous day, although a bit muggy. And it did rain before I left, but it was just a focal shower at the house. Dan was a mud bug though. Like, he literally still had sopping wet mud all over him. So, yet again, he got a bath before (and after) his ride! I should probably just break down and clip him. But the weather keeps saying it's gonna cool off. He's already puffed up! Anyways, I was feeling a little blue because of Baby girls' recent OCD discovery. Sigh. But Dan cheered me up. 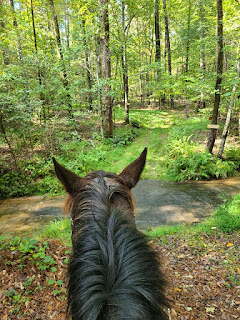 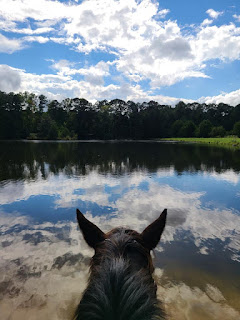 We did a quick warm up loop around the lake and then met Jacel in the jump arena. She started us off with a placing pole to a vertical to a placing poll. Interestingly, she noted that he landed way far off the jump. I think that he just jumps long. (which means I should NOT panic about oxers!). When he takes off from a long spot, he jumps great and bascules over the fence. When he takes off tight... he lands really far off and doesn't bascule until he's well past the fence. She said that was fine and we weren't going to change it. We would change his front end and change his form a little but not who he was and how we worked. If that makes sense. :) She did say that she thinks he was sore, thus he started throwing himself over the fences instead of sitting down and rocking back on his hocks. Yes. And that he was stuck in his barrel, which made him stuck in his hind end and out behind himself and then stuck in the withers. Okay, yes, I agree, especially now that I've felt what he feels like when we unlock the barrel. Which is what she said next.. that NOW that we've got his barrel unlocked and him using his hind end (by leg yielding him in the turns and almost into the fence), he's not stiff and then he can lift his withers and forehand. Ahhhh... And she said now that we've got that... the next step is to project that forward to upward. She said for a horse that is built incredibly uphill, he tends to travel fairly downhill. And basically, she politely said ... there's no excuse... I need to fix this. And she's right. But she also said that we've moved slowly but have put the steps in place to take the next step to getting him to go upward instead of diving forward. In other words... we have to get him to lift up his shoulders and step the hind end up to the fence. Rather than thinking of riding him forward to the fence, because then I tend to let his energy go down and out, vs up and out. So.. she wanted me to leg yield him into the turn, then when he's in the outside rein, hold the bend with the inside leg, and close the door with my outside hand. Almost a counter flex. This worked to get him straight and up in the front end. And it was super awesome! He jumped great and felt very uphill. Even when the "distance" wasn't there. So we practiced that a few times with the placing pole. And you know what else was cool? Well, two things... one, he nailed his lead changes every time by either landing on the correct lead for our travel path or swapping fully quickly! And two... it ties in so nicely with my Rana lessons. I mean, duh, we just talked about turn on the forehand and how that is the "aspirin" for getting him into the outside rein. And Jacel talked about how I needed to turn him with my outside rein and seat and core, not just grabbing the reins. Yay!

So then we did a mini course. It was 3 jumps on a circle, doing the first one first and last to make it four jumps in a row. It started off a little hectic because instead of doing what we had just practiced, I took my stupid left hand and pulled it down and back and effectively shut him down. He went, but only because I had money in the bank. So we fixed it. I sat up and rode. And it was WAY better! Heck, that oxer was fairly big and he even jumped it off a not perfect spot. Then we went off the right lead and that was much easier and we got it right from the get go. And wow! He feels amazing jumping like this! It's almost like I'm lifting his front end with my hands except that's totally not it. He's lifting and my hands are following and supporting. It's just that his withers are coming up to meet me, vs me having him fall out underneath me. And the lift is not coming from me lifting my hands and inverting him.. it's coming from him lifting his shoulders and withers into my hands. It's just super cool! He feels SOOOO rideable and like we could jump almost anything from anywhere! 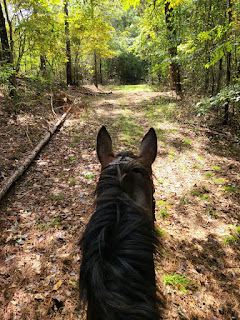 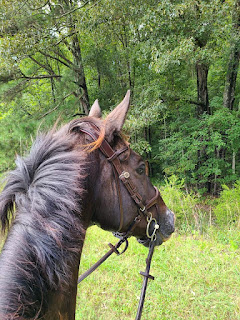 So then we did another little mini course. And sneaky Jacel popped a vertical up to 3'6" (she said!). I didn't notice it til after we jumped it and I looked back. Dang!! And he jumped it so effortlessly, and even off a slight angle as it was a bent line. Of course after we did right bend to right bend, we had another harder right bend then a left bend and I messed it all up for the 3rd and 4th fence. So then we came back to those last two and did them much better! Yahoo!!! 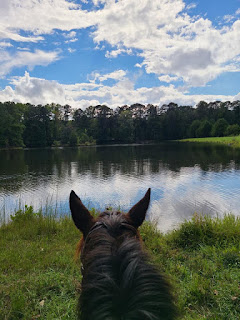 It was a really good lesson and so helpful! So my homework is to set up the placing poles and vertical, and some V-poles and just keep working on it. Sadly there was no video or photos. I need to remember to bring my pivo or something. But then Dan and I went on a nice long hack and did some hills to get some fitness back. We've been slacking a little with riding at home and doing dressage mostly. It was a gorgeous day and we had a good hack! 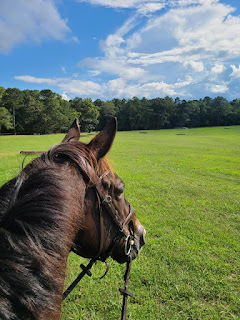 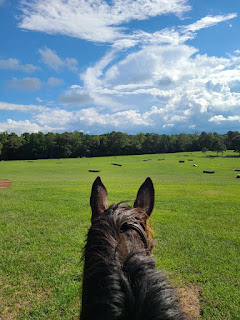 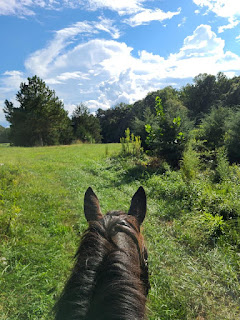