And it's another beautiful day!! I ended up riding at home again today because I ran out of time between church and meeting Mike after he went to visit his mom and before he left for New Jersey. But it's all good because I have a lovely arena to ride in! We decided to do some dressage again because obviously we jumped yesterday and I didn't feel like hacking the neighborhood again. 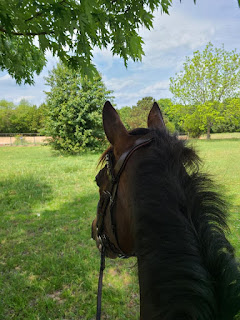 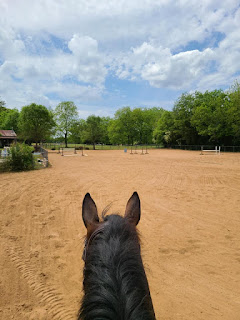 I decided to put the equiband on too, as I figured it wouldn't hurt. My fence is still not finished so I brought the other two in to their stalls to let them get in the shade and fans for a bit. Dan was a little sad he left his sissy at home but he was brave. And then he was VERY brave as there were 2 four wheelers playing the field behind the arena. The trees are thick enough that you could hear them and sort of see glimpses of them. I was actually really really proud of Dan as the buzzing noise was annoying. He had to stop and stare a few times but he really didn't seem to mind them mostly and kept working. Good boy!

We had a good ride. We started with our walk work and lateral stuff. His turn on the forehand is really getting good! Then we did some trot work and he felt good. We moved onto the canter and our transitions are getting good too! I tried to do haunches in at the canter and we sort of got it. So then we tried to half pass and it wasn't great. But then we went back to the trot and did our half pass and I remembered my body position and then tried it at the canter and it was MUCH better. I think I've just got to do less with my body at the canter. And still keep him round and soft and bent, but... it seems like if I just think haunches in and then half pass, my body cooperates more than if I think of haunches in. So, we had some acceptable attempts at the beginnings of canter half pass. I thought anyways. :) Then we were going to do a teeny bit more trotting because he suddenly puffed up and felt all good and cocky! But then.... it sounded like he kicked a rock and suddenly he was lame. It felt like he stepped on a rock or pulled his shoe. I pulled up and looked and he had all four shoes. I trotted off again and he still felt funky so I hopped off and checked all four feet. Nothing wrong. So I got back on and trotted both ways, partially to feel him out and partially so pivo could get it so I could see how he looked. And he still felt not quite right. It wasn't quite so bad. Oh, and I even pulled off the equiband thinking it had rubbed him or something. Nope. Although he was pretty foamy around it. Sorry buddy. I honestly forgot you had it on. I decided to just get off and be done since I'm not exactly sure what was going on. I really really really hope (and pray) that I just overdid it with the equiband and he fatigued and got sore. And not that we have an injury now. There was no heat and no swelling. I hosed him off and put the bemer on him again.

I turned him out and he was walking fine. Then he rolled and rolled with gusto, like usual. So.... hoping and praying! He'll get tomorrow off and then if the weather cooperates, I'll take him to Ashland Tuesday for a light ride to feel him out. I was thinking about a lesson with Rana again but I'm thinking now maybe not. Poor guy. He wants to work so bad and tries so hard. 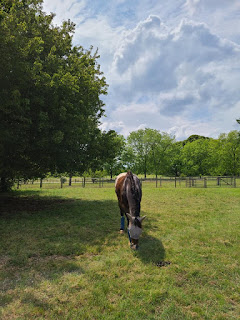 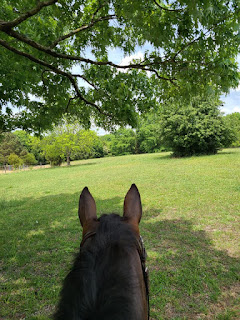 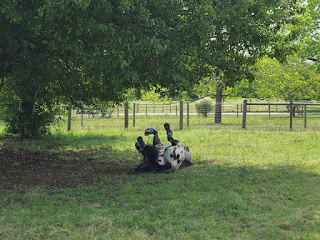 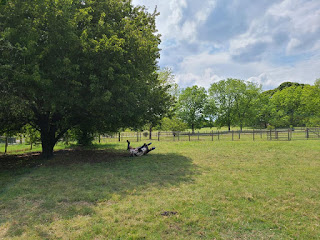 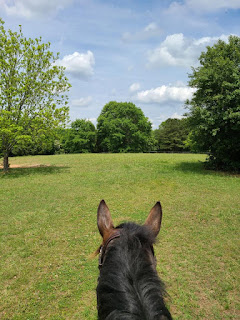 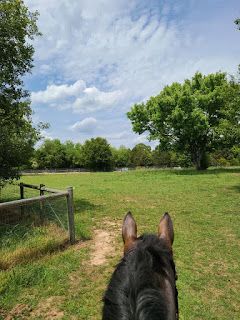 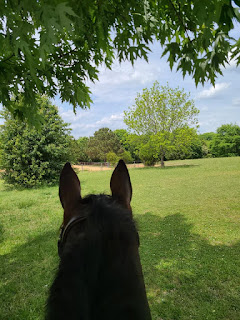