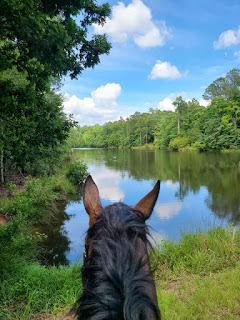 We jumped today because we haven't jumped since Chatt and we're showing at Area 3 Championships this weekend. It's just Beginner Novice, but still. I want to be competitive. So we did a lesson at Chatt. It was raining all morning and looked very ominous on our way to Ashland, but... the skies cleared up and it was beautiful for our lesson. Hot and muggy, but beautiful! It was a great lesson. We warmed up over a cross rail and then she made it a vertical. Dan was on fire and ready to go. No more need to use the whips or spurs or "shock and awe" even! He's in front of my leg and happy to be there. Then she had us do a little roll back turn and told me to use my inside leg and then move my hands over (both hands the same time same way) and then turn my body... like almost pivot my body. And hey.... that's a handy dandy roll back turn we've got there. I asked on the second one we tried if I needed to use my outside leg and she was like "yes, of course" and I said "oh, so like a turn on the haunches". She laughed and said yes, but.... "can you imagine what you would have done had I told you to do a turn on the haunches?" ha ha... touche!! Touche! But she's right. I would have dressaged it up and made it awful. But this is handy! Almost too handy. Like, our big swooping turn turned into a tight handy little roll back, but... because he was packaged and bringing his inside hind leg up and underneath himself, we could bounce right over the fence! Way cool! 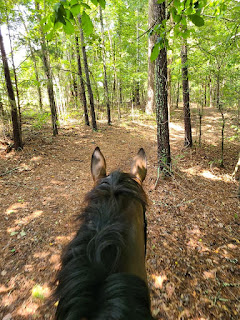 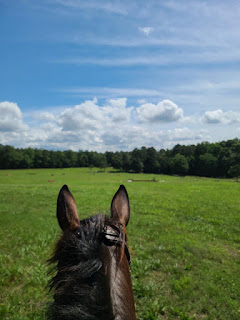 So then she sent us over a course. We did it 4 times.. the first two they were set smaller and the second two she made the oxers bigger and wider, because... stableview. And he was super! I messed up some and tipped up his neck a time or two, but... guess what?! He didn't stop!! Granted, I still need to stay upright and not tip because that's what makes him nervous and undermines his confidence. But yay for having money in the bank! And I was even able to sit up and back but push him to the bigger stride and he went for it. YAY! Such a fun feeling. We're back!

We quit with that as we are showing and didn't want to over do it. We stayed and watched Courtney and Romeo a bit and then we hacked down to the lake. Again, he didn't even want to get his toes wet??? Maybe it's no fun when it's not a party? Maybe he misses Sissy? But we had a nice hack back to the trailer and a nice rinse. oh, and... weirdo! He stopped to lick the dirt again and made a giant mess this time. Hee hee... So weird!

Tomorrow I probably won't get to ride, but I did get a LOT of packing done today. And then Thursday we'll leave for Aiken. We'll dressage there and then Friday is dressage and XC and then Saturday is stadium. :) I am excited! 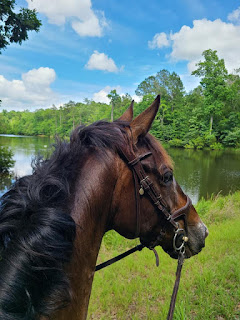 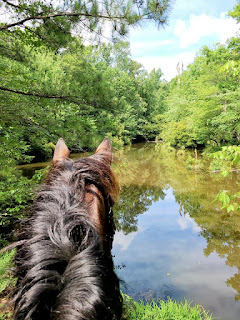